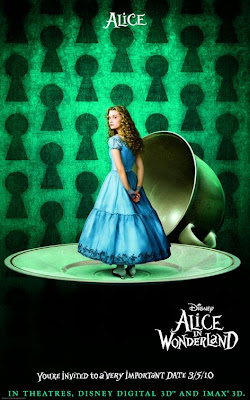 in Wonderland (PG)
Dir. Tim
Reviewed by Matt Adcock
Tim Burton, the very lord of gothic fantasy films, has found his potentially ideal source material in in Wonderland. Lewis Carroll’s already crazed world of unchecked madness is here turbo boosted in 3D by ’s unhinged imagination with dazzling, eye popping results.
Bringing his regular collaborators Johnny Depp and Helena Bonham Carter to this CGI heavy tea party proves to be a masterful stroke as their Mad Hatter and Red Queen are new iconic cinematic performances that will endure.
The plot is cleverly worked to be a sequel of sorts to the original Wonderland, taking many elements from Carroll’s own sequel ‘Through the Looking-Glass, and What Alice Found There’ but mixes in some ‘revisiting’ of Wonderland’s finest set pieces.
It’s been 13 years since (Mia ‘next year’s new Jane Eyre’ Wasikowska) now 19, first fell down the rabbit hole and found herself in the freaky world of "Underland".  When she is taken to a society garden party where it is engineered that she must accept a marriage proposal from stuffy Lord Hamish (Leo Bill), spots the White Rabbit (Michael Sheen) and flees. The rabbit hole beckons and from then on we join her on a phantasmagorical journey that reunites her with classic characters such as the ‘Tweedles’ (both played by Matt Lucas), the Dormouse (Barbara Windsor) and the scene stealing Cheshire Cat (Stephen Fry). Depp even manages to infuse his Mad Hatter with some spirit of Captain Jack when he gets to swing a sword in the final battle.

Central to the plot is a prophetic scroll which depicts 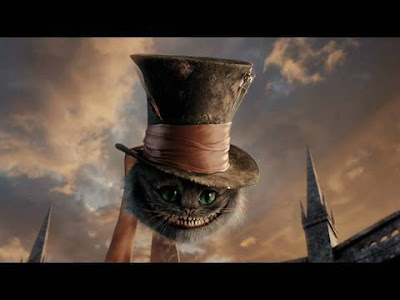 "You ain't seen me, right?"
This new interpretation certainly delivers on spectacle even if the 3D feels a bit unnecessary in such an amazingly rendered fantasy world. It may feel a bit overly ‘family friendly’ by Tim Burton standards but my youngest son found the Jabberwocky scary enough to pass muster. If you’re planning to visit Wonderland, set your expectations to ‘lavish but shallow’ and maybe try to think of a couple of impossible things before breakfast – just to be on the safe side.
UNSEEN DELETED SCENE:
Alice takes to sea and becomes a pirate queen with Captain Jack, sorry Mad Hatter...
Darkmatters rating: öööööööö (8 mad hats out of 10)

Pardon me for being late to the party - but I just discovered your blog via Black Sheep. lookin' forward to reading more!

As for Alice, I'm with you. This movie is rather good, unneccessarily in 3-D, and a victim of sky-high expectations. It has a lot of nuance, and is surprisingly restrained, while still being a visual feast.

i havent watch this yet but i saw the poster...was it johnny depp again?