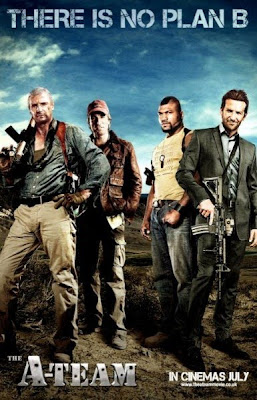 One year ago, an elite commando unit was sent to prison for a crime they didn't commit. These men promptly escaped from a maximum security facility. Today, still wanted by the government they survive as soldiers for hire. If you have a problem, if no one else can help, if you can find them, maybe you can hire... the A-Team.

The new A-Team aren’t Nam vets, these are guys are straight out of Iraq where they were framed for a crime and promptly banged up. Six months later Hannibal breaks them out and vows revenge on whoever set them up who include a nefarious black ops crew led by boo hiss bad guy Pike (Brian Bloom). The CIA is also after the A-Team and could prove to be an even greater threat thanks to Lynch (Patrick Wilson) who wants to see them go down for their supposed crimes. Jessica Biel is on hand to be the hard nosed military Lieutenant also tasked with finding and bringing in them in but she has a history with Face whose good looks and swagger might just be enough to sway her emotions.

Director Joe ‘Smokin Aces’ Carnahan delivers lots of bang for your buck with some truly audacious action set pieces that include planes, tanks and a stunning cargo transporter ship climax. Sure the plot is fairly feeble but there are more than enough fights, chases, stunts, wise cracks and laugh out loud moments to make up for it.

My two sons proclaimed The A-Team to be the “coolest film of the year so far” so there may soon be a new generation of fans won over. Older watchers should be sure to check out the after credits scene where original series actors Dirk Benedict (Face) and Dwight Schultz (Murdock) make fun cameos.

The A-Team might be stupid and completely over the top but in the end you just have to go with it and say "I love it when a plan comes together".

The A-Team are challenged to go up against The Losers and The Expendables (seeing it this week)... utter carnage ensues but the A-Team walk away triumphant - because let's face it - they never get shot!!

Email ThisBlogThis!Share to TwitterShare to FacebookShare to Pinterest
Labels: The A-Team