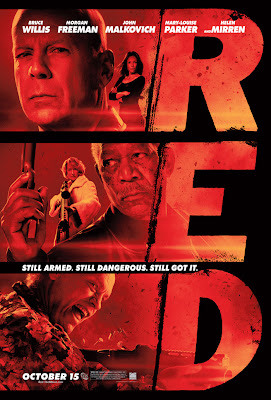 Welcome to the world of Paul Moses (Bruce Willis) - a retired CIA ‘Black Ops’ agent whose days are now filled with nothing more exciting than the occasional flirty phone call to phone operator Sarah (Mary-Louise Parker) about his government pension cheques.

That is until one day a ‘wet work’ hit-team is sent to take him out because Moses has been deemed R.E.D. (Retired Extremely Dangerous). But Moses is still a tough nut and after eliminating the hit-team he sets about trying to find out why he’s suddenly been deemed a target and sanctioned for execution…

Director Robert ‘The Time Traveller's Wife’ Schwentke's film takes a fun, ‘A-Team’ style reworking of the DC Comics graphic novel series which details the fight back of this old agent against a corrupt new Vice President. New to the plot – for the film – are additional R.E.D. agents who team up with Moses, there is crazy paranoid Marvin (John Malkovich), raucous cancer victim Joe (Morgan Freeman), and elegant ‘hit-woman’ Victoria (Helen Mirren). It is this stellar cast that lends the film such a great air of quality, fun and kick-ass action. It is a genius reworking and there is something quite special about seeing someone like Helen Mirren operating a heavy mounted machine gun or a ‘Call of Duty’ style sniper rifle. 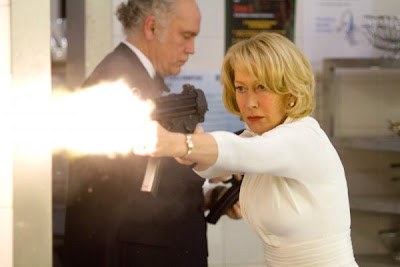 "call me 'Grandma' again..."
﻿
As mentioned the tone is much lighter than recent comic book adaptations – RED is a blast of bullets, quips and outrageous action which isn’t too sadistic or grim. This is potentially the best ever family friendly shoot-em-up which rocks some great set pieces, I saw it with my family and we all came away greatly amused.

If The Expendables opened the door for this timely ‘revenge of the oldies’ tale – the common factor from both films being Bruce Willis and his still winning charisma. There are some great lines such as when Sarah meets Moses and tells him “drugged, kidnapped… not an ideal first date but I’ve had worse” – the romance / action ‘fun’ factor is high, in the same spirit as this year’s Knight and Day.

It’s a bold move to make the United States Vice President (Julian McMahon), the villain of the piece – it seems that the ‘hit list’ Moses finds himself on is part of a big cover up for some bad things that might blot the Presidential candidates record. Also ranged against the elderly heroes is Alexander Dunningpower (Richard Dreyfuss) an arms dealer who is tied into the cover up.

RED is lots of fun and is much like Frank Moses himself - hard on the outside but ‘gooey’ on the inside. Enjoy!!


Bruce Willis's Moses is hired to track down and kill the remaining Expendables as they have become a liability!!