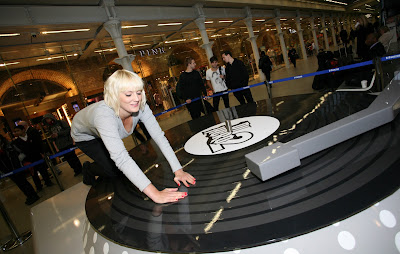 Next Friday the world will throb to the launch of DJ Hero 2 – as thousands of DJ gamers take to their decks – on PS3s across the globe. Today, to mark the anticipated release the World’s largest turntable was installed at King’s Cross St Pancras International station.

Early morning commuters were provided with a musical treat as they danced their way through the station to some of the world’s biggest tunes. Former DMC world champion and radio 1Xtra mix master specialist DJ Blakey was on the decks whilst members of the public lived-out the fantasy of being a superstar DJ, scratching and mashing up tracks in front of a huge audience.

I got to give one of the plastic decks a spin and was impressed with the new game – the graphics are sharper, the mix of tunes sweeter and the gameplay has been cranked up a notch or two from the fun original.

The good news is that if you have the first game, you can use your existing deck to play DJ Hero2, the cunning buggers at Activision though are releasing a two deck party pack which comes with a mike so you can shout “let me hear you scream!” etc… in your own front room and have people passing in the street turn to stare!?

DJ Hero was a lot of fun, but DJ Hero2 looks to be better in every conceivable way – if you’ve ever wanted to mix, scratch or spin some tunes, mark 22nd October in your calendar and get ready to make some noise!!

Check out the DJ Hero 2 site
Posted by Matt Adcock at 9:20 pm