Sometimes less is more and occasionally a short film will pop up and blow you away – in the past I’ve been deeply impressed by short films such as Prey Alone, Batman: Dead End (also known as Batman vs Alien vs Predator) and a short animation called Red Princess Blues – The Book Of Violence.

Now the guy behind Red Princess Blues is back – this time with a stunning 11 minute feature scene that works as both a promo and a very cool viewing experience in its own right. Red Princess Blues tells the tale of a young teenage girl, Zoe (Tabitha Morella) who is lured into a grimy after-hours carnival tent by the sleazy rock n roll carnie Rimo (Richard ‘Black Hawk Down’ Tyson). Rimo is a low-life with trouble on his mind and the gorgeous jailbait Zoe is way out of her depth – is there anyone amongst the rag-tag bunch of carnies in Roscoe’s Freak Show & Carnival to save this poor girl from the very unwelcome advances?

In a word – yes – fortunately for Zoe there is a loner woman drinking at the bar, might she be the legendary ‘Princess’ (Rachel Grant)… If you’ve seen the animated prequel short, you’ll know that there’s one thing that Princess does well – violence!! Cue a kick ass fight sequence – heavy on style and potential – it is very watchable and nicely adrenalin pumping stuff. 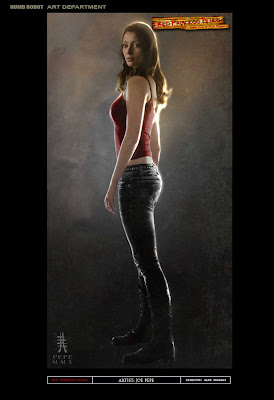 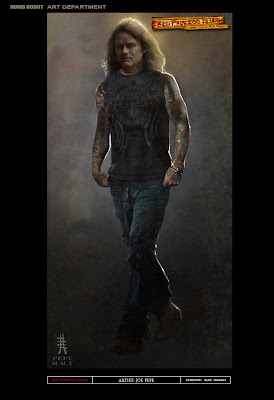 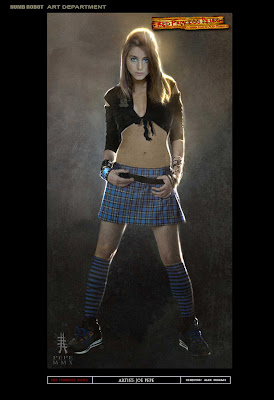 Ferrari has a brought his single vision to wonderful, CGI live, backed up with superbly stylish set design that wouldn’t look out of place in the awesome, hyper-real comic book alternate realities of films like Sin City or The Spirit or The Crow.

Red Princess Blues oozes menace and delivers a fantastic thrill ride of pure viewing pleasure. Check the trailer below – and then log on to www.redprincessblues.com and click the link to download the Red Princess Blues app from the iStore and enjoy the full short film on your iPhone/iPad/iPod!? 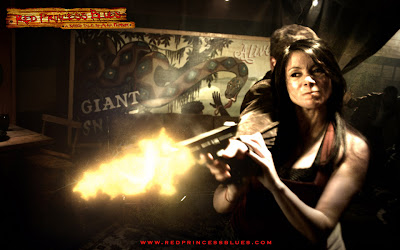 “Let’s play carnival, you sit on my face and I’ll guess how much you weigh.”
Darkmatters rating: ööööööööö (9 awesome violent princesses out of 10)