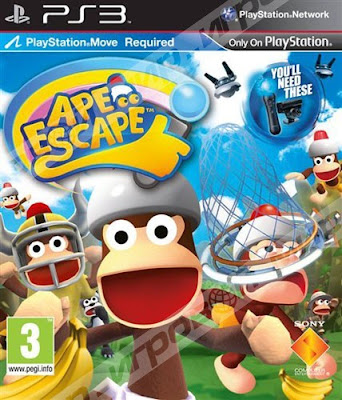 Man has for some time feared our nearest animal ‘cousins’ the ape… If Planet of the Apes is any indication, then one day we’ll be at the mercy of the hairy simians – so what can we do?

Well if you’re a PlayStation fan then you’ll know that the PS brand machines have been allowing humans to capture and suppress apes since the original ‘Ape Escape’ hit back in 1999.

The PS1 wasn’t blessed with MOVE controllers so the game took advantage of the dual analogue stick packing DualShock controller and developed a good sized fan base as humans took the fight to the apes and captured them.

Ape Escape PS3 is a whole new game – bringing the MOVE controllers into full effect allowing you to swipe them with nets in a 1:1 motion control, suck them up with a vacuum (MOVE having triggers allows it to do things that Kinect can only look on enviously at), shoot them with a slingshot (yep triggers again LOL) – works a treat and is an immediate blast of fun!

There are plenty of levels each split into phases where capturing the apes is supplemented by collecting bonus bananas and power ups. Just don’t let the thieving apes near your bananas (health) as they’ll nick off with them.

There are more advanced gadgets – before long you’ll be transmuting apes into bananas and zapping them too. Just be sure to get a battery as you’ll need power to use gadgets.

Repeat monkeying about is encouraged by having online leaderboards where your scores can be compared to other PSN players and a monkeypedia which is like a Pokedex ahem, so you’ll need to catch em all…

Finally there are some mini games but the first one is enough to put you off these as it requires you to use a DualShock sideways and one handed (come on Sony you know there’s a NAV MOVE controller right!?)… If they don’t patch this element then Sony should are seriously shooting themselves in the foot!

So Ape Escape is a fun blast which packs graphically slick monkey bashing fun – as long as you stick with the main quest levels. If the NAV controller gets patched in to be used for the mini games then add a star to the overall score too.

Ape Escape has been well brought into the HD generation – you could say that spanking the monkey feels even better in HD!?