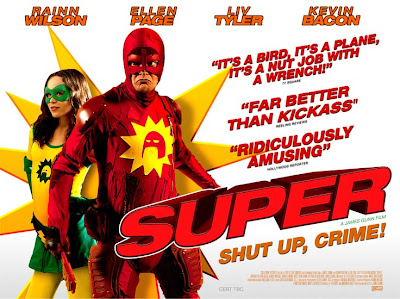 There comes a time when society pushes people too far. When someone snaps and decides to stand up to the rampant crime and sheer injustice…

That man is KICK ASS, no wait, that was last year…

That man is The Crimson Bolt (Rainn Wilson) also known as big time loser Frank D’Arbo. Franks a religious guy whose had a rubbish life – he has just two moments that he’s been proud of ‘his golden moments’ one was when he tipped off a policeman as which way a robber ran, and the other was his wedding day to his unfeasibly hot wife, Sarah (Liv Tyler).

One day Sarah leaves Frank for a slick pimp / drug dealer called Jacques (a nicely slimy Kevin Bacon). It triggers a breakdown / psychosis in Frank who sees a vision of the ‘finger of God’ touch his brain and answers what he believes to be calls of a ultra fundamentalist religious TV show starring a saintly superhero The Holy Avenger (Nathan ‘Serenity / Firefly’ Fillion) to take the fight to evil… So “The Crimson Bolt” is born with a mission to take the fight to evil with his battle cry of “SHUT UP CRIME!” 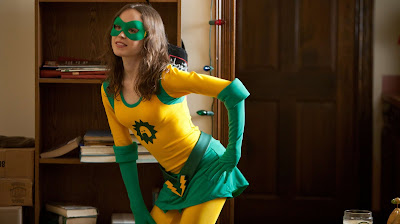 "Ellen page = hot sidekick Boltie"
Director James Gunn cameos as ‘Demonswill’ – Holy Avenger’s nemesis and has a blast in trying to lead teens into sexual promiscuity and general debauchery. But the film is totally stolen by the Crimson Bolt’s sexy sidekick ‘Boltie’ otherwise known as Libby (Ellen ‘Inception’ Page channelling the spirit of a sexed up older ‘Hit Girl’)… She throws all inhibitions aside and delivers a performance that has ‘iconic’ written all over it.

Super is an edgy and supremely ‘wrong’ film – not for anyone who can’t deal with darkest possible humour and grim violence. Several critics seem to have seriously missed the point – moaning about how Super isn’t a Kick Ass 2. I’d just say that Super works as more twisted comic sidepiece to Kick Ass, same genre, very different films.

Challenging, heartfelt and scattershot – Super is a film that doesn’t know any boundaries and is all the better for it. Do the words ‘cult classic’ mean anything to you?

Spiritual Enlightenment öööö - touched by the hand of God 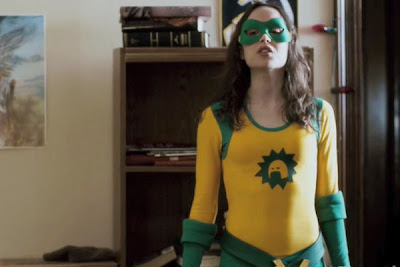 "everyone needs a sidekick"
Posted by Matt Adcock at 5:23 pm