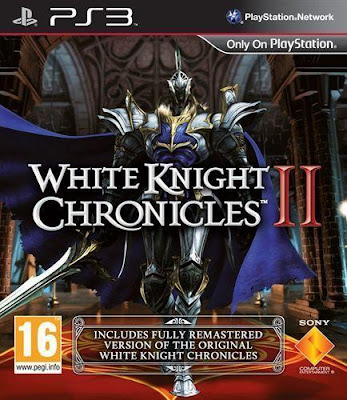 Some say that you don’t have to be a massive geek to enjoy complex role playing games but that isn’t a widely held view outside of the millions who have sold their souls to World of Warcraft and the like. Level 5 however are the kick ass developers behind the PS2 age classic Dark Cloud and the first White Knight Chronicles which was a fun Japanese Role-Playing Game (JRPG) and they are at the cutting edge of helping to widen the appeal of these games.

Back with a beefed up sequel in White Knight Chronicles II which continues the whole battling RPG adventure and manages to improve on the graphics, control system and general excellence of the original. This might just be the JRPG that helps make role playing on your big HD TV both more accessible and whisper it ‘acceptable’ to a wider circle of non hard core geek gamers.

If you’ve played any JRPG – you’ll be right at home here, the basics are all in place, hero who forms a band of like minded pals to fight for the forces of good, levelling up and collecting powers and equipment along the way to saving the world. Oh and I should just mention the killer ‘wow’ factor that both the White Knight games bring the party – basically when you have sufficient power your characters can transform into giant knights – massively powerful and seriously brutal warriors who can beat the living crap out of multiple enemies.

White Knight Chronicles II has some brilliant features including character customisation that allows you change up your main character – who you will use both in the single player and as your online player. And, whereas the first game just let you create your ‘human’ character, this time your get to make your ‘White Knight’ too. Creating your own bad boy devastating pain bringer is enough to put a big smile on even the most cynical gamer’s face.

The even better news is that your customised Knight can be used in online play too… Nice.

Battling (which forms the meat of all modes) has been nicely improved too with a host of new ways to take the fight to your enemies. There is certainly plenty of content too – clocking over 50 hours of play – which can be tackled solo or in a team up online scenario.

Veterans of the original game are rewarded by being able to transfer characters, equipment and gold from the original title which is really nice bonus. And Sony in their wisdom have even added the first game to the blu-ray disk so you are in fact getting both White Knight Chronicles games for the price of one. Of course if you choose to play through them both back to back you might not have a real life to return to as these are potentially life consuming adventures!?