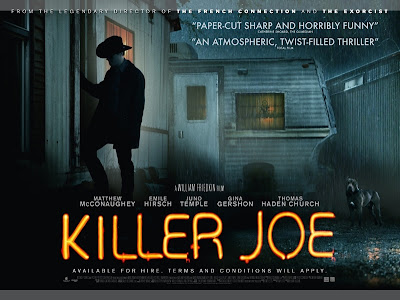 When 22-year-old smalltime trailer-trash drug dealer Chris (Emile Hirsch) finds himself in debt to a very nasty drug lord, he hatches a desperate plan to try and cash in on his mother’s $50,000 life insurance policy.

Of course it isn’t quite a simple as it sounds and the contracted hit-man ‘Killer’ Joe Cooper (Matthew McConaughey playing brilliantly against his nice-guy type), might just tear the dysfunctional family apart when he takes a sinister liking Chris’s sister Dottie (Juno Temple). 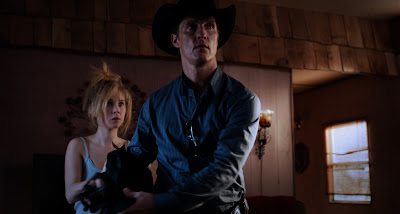 "Joe stands up for his young 'retainer' "

Joe is the creepiest, craziest, crooked cop to hit the screen in some time – highly charismatic and entirely morally dubious, he demands Dottie as a ‘retainer’ for his services until Chris can pay him from the insurance payout.

The film is based on a provocative black comedy play by Tracy Letts, and director William ‘The Exorcist’ Friedkin doesn’t hold back in bringing the shockingly twisted plot to throbbing gothic noir cinematic life.

Killer Joe is a deep-fried red-neck-em-up that explores the thin line between good and evil and exposes the possibility of evil in all of us. And just when the tension is a boiling point it unloads a metaphysical shotgun blast of misogynistic bad-taste, which is likely to challenge even the most open-minded viewer. I don’t want to spoil anything for you but let’s just say that it might be a while before you order a KFC again… 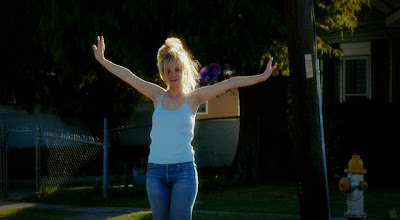 But if you’re a fan of crackling, messed up neo-noir thrillers like The Killer Inside Me or Blood Simple then Killer Joe will be right up your hard-boiled street. And whilst ‘Joe’ doesn’t have the same expansive scope – due to it originally being a play – it adds a deep vein of very dark comedy that is likely to have you laughing when you’re not recoiling in shock.

All whole the cast go about the sordid business with gusto – McConaughey is fantastic as the slimy titular character and he is matched all the way by a gutsy Lolita-ish performance from Temple. Some of the best lines though come from Chris’s dim-witted father Ansel (Thomas Haden-Church) – pick of the bunch being when ask if he was aware of his wife’s plan to rip him off. He replies “I’m never aware!”

Killer Joe is a hard film to completely recommend as it goes to very ‘wrong’ places but it will certainly make you think.

31/2 – darkness is only a heartbeat away

Awesomeness ööö – sleazy does it

Spiritual Enlightenment -öö – salvation is far from these people 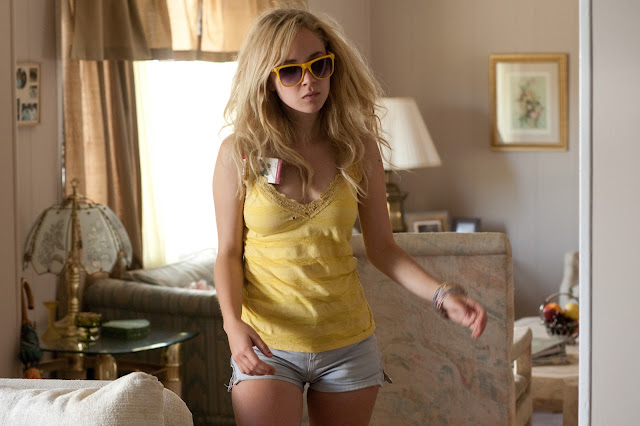 "Juno next up in Little Birds"