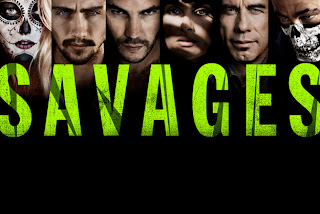 “Just because I'm telling you this story... doesn't mean I'm alive at the end of it.”

Oliver Stone blasts back onto the big screen with a brutal, visceral and beautiful tale of drugs, violence and relationships in the form of ‘Savages’. Step out of the UK autumn drizzle and into a sun-drenched world of drug lords, Santa Muerte masks, grim beheadings and heavy-duty gunplay, all underpinned with a kinky relationship love triangle… 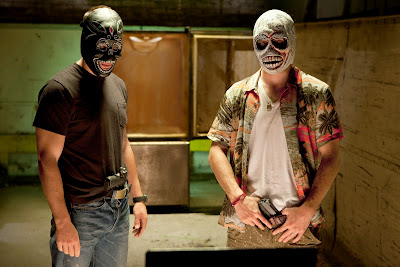 Savages tells the tale of attractive young beach bum weed-heads O (Blake Lively), Ben (Aaron Johnson) and Chon (Taylor Kitsch). These three sexy as hell youngsters share a bed, run their own weed growing / selling business and enjoy the good life… But everything changes - they get in way over their heads when a very nasty drug cartel makes them an offer (which they can’t really refuse) to take over their operation.

O is the siren nymph who shares her two lovers - Ben is the gentle, Zen one who knows the 'erb and uses his funds to help save African children. Chon however is the hard Navy SEAL who is prepared to be the 1% violent enforcement, which their dubious business requires when people decide not to pay for their product. 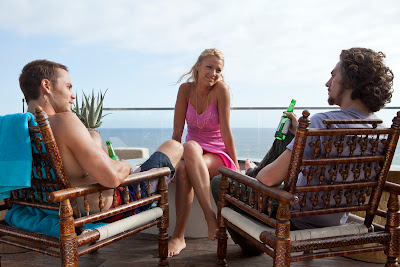 When the evil Baja cartel lead by Elena Sanchez (Salma Hayek) – who has a penchant for head removal of anyone who crosses her - move in and want a cut of their business, the trio decide to cash in their ill gotten gains and run. But the Baja enforcer is a seriously nasty piece of work named Lado, played by Benicio del Toro, who won’t let them go and so kidnaps O.

There are some excellent action scenes, the stand out of which sees Chon get some of his army pals in to help them take down a Baja drugs money drop – complete with IEDs, rocket launchers and copious amounts of gunfire. 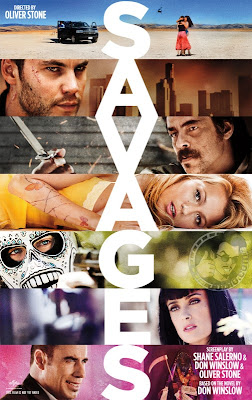 Another unforgettable scene see Ben and Chon’s sweaty highway trip to try and deliver a van loaded 300 pounds of grass against the clock but desperately trying to avoid the cops...

Savages tries to show the situation from both sides of the story but you can’t help but root for the good looking trio of ‘heroes’ – they do look absolutely amazing. In fact if you can stand the serious violence, the eye candy (both male and female) is off the scale hot.

Spiritual Enlightenment ö – just say 'no' whatever the cost?