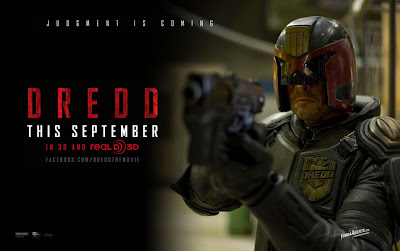 800 million people living in the ruin of the old world. Only one thing fighting for order in the chaos, the men and women of the Hall of Justice. Feared and renowned the Judges are the thin blue line – they are the law, empowered to deliver the sentence on criminals on the spot – and often the sentence is ‘death’.

DREDD 3D sees 2000AD’s Judge Dredd (Karl Urban) ripped straight from the comic’s pages and given his second big screen outing, after the lackluster ‘90s Stallone effort. Director Pete Travis’s new grittier and darker version sees Dredd partnered with a rookie psychic Judge named Anderson (Olivia Thirlby). Together they face a nightmare in the form of a 200-floor mega-block, which is controlled by a ruthless, and psychotic crime lord named Ma-Ma (Lena Headey). 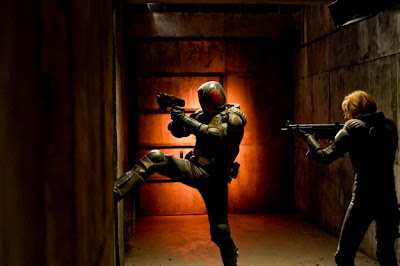 When a triple murder investigation leads the dynamic duo of Judges into a dangerous drug bust, Ma-Ma locks the entire block down and set her army of criminals the task of wiping them out before they can dig too deep into her drug operation. The drug in question is a new one called SLO-MO, which slows down the users perception of time so each second seems to last an age. So it’s two Judges verses hundreds of seriously tooled up criminals in a fight to the death, and that’s it pretty much for plot, if it sounds a bit like the excellent ‘The Raid’ from earlier this year, fear not, DREDD brings enough dark sci-fi-ness to the party to make it a fine companion piece rather than any ‘me-too’ effort.

The ultra-violent carnage that ensues is of the seriously gory and highly graphic kind. The filmmakers, who include Luton’s finest Steve Worsley on assistant editing duties, bring the action to eye-watering life, making fine use of the 3D too in the process. 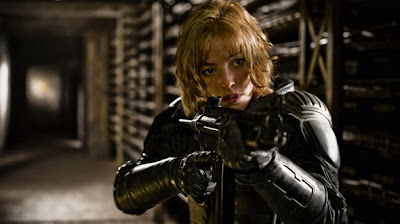 DREDD 3D is an action packed thrill ride that doesn’t pull its punches. At times you even feel slightly sorry for the heavily armed gang members as DREDD cuts swathes through them with his various types of ammo which include incendiary, high explosive and hot-head (which lights up a perps head like a lantern at one point).

Urban brings a great emotionless grizzled menace to the lead role and he’s ably backed up by Thirlby who gives the film a little humanity (and who looks great in her Judge armour). Urban keeps fans on side by not taking off his helmet throughout, and Heady delivers a nicely evil turn as Ma-Ma.

Laughs ö – you might laugh at the sheer OTT ultra violence

Babes öö – Thirlby is kind of hot in uniform

Good review: glad they didn't go for that look with Anderson: not exactly practical.