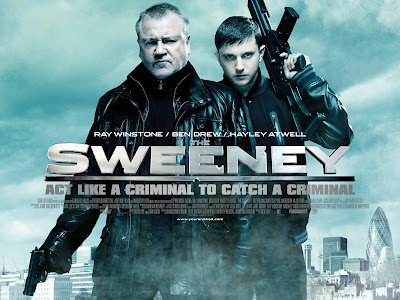 “We’re The Sweeney, we do the things that you can only dream about…”

Who do you turn to when armed criminals start murdering innocent people in broad daylight on the streets of London, turning over private banks and jewelers at will and generally flaunting the law? The Metropolitan Police Flying Squad or ‘Sweeney’ – as in ‘Sweeney Todd’ rhyming slang - that’s who. 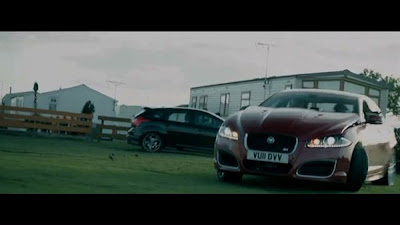 "Jaguar vs Ford Focus ST (driven by The Sweeney)

The Sweeney, led by Jack Regan (Ray Winstone), backed up by George Carter (Ben ‘Plan B’ Drew) don’t play by the rules. Beating up criminals, hunting them down with extreme prejudice and generally taking any excuse to fire up their modded Ford Focus and recklessly speed about. As Carter says at one point ‘you have to act like a criminal, to catch a criminal’…

Director Nick ‘Football Factory’ Love has a knack for bringing over-the-top violence, swearing and macho posturing to the big screen and so this update of the classic ‘70s British cop-em-up fits like a glove.

I can just about remember seeing the original Sweeney (played by John Thaw and Dennis Waterman) they used to burn around in a Ford Granada and beating up criminals. Not a great deal has changed in this big screen modern day version. 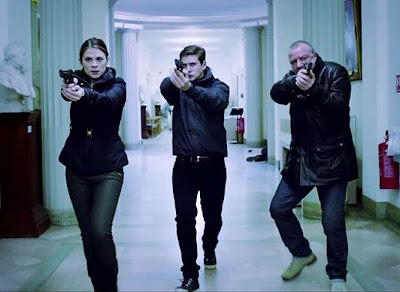 It seems that Allen (Paul Anderson) a high level criminal is on the loose and wanted for a daring armed robbery during which an innocent shopper was executed. The Sweeney are soon on his case but all is not as first appears… Throw into the mix an uptight boss of the department (Damian ‘Homeland’ Lewis), and an angry internal investigator (Steven Mackintosh), who wants to shut The Sweeney down and mix until it all goes off big style!?

The plot bends over backwards to accommodate pretty much every cop drama cliché ever seen – including some lovely nods to other films such as Scum (one of Winstone’s first films). The females in the cast, who include the lovely Hayley Atwell, are mostly there for decoration and emotional plot points. But none of this stops The Sweeney being a brilliant burst of crunching action fun.

"Winstone giving Plan B his 'honest' feedback on the new album"

Winstone plays his take on Jack Regan a lot like a more violent Life on Mars’ Gene Hunt while Drew convinces as a chav thug turned good (if you saw in Harry Brown, then you’ll know what to expect).

The Sweeney is stylishly filmed and packs both the best opening sequence of any film this year and an awesome high caliber weapon shootout across Trafalgar Square, which is seriously exciting.

Don’t mug yourself off – go and see The Sweeney!!

Horror öööö – kinda violent and over the top

Spiritual Enlightenment öö – be good or the law will beat the living c**p out of you...

"Hayley swears not to be carrying any concealed weapons..."