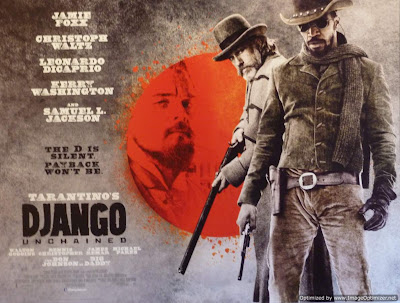 “He is a rambunctious sort, ain't he?"

Tarantino blasts back onto the big screen with a fast shooting, faster talking bountyhunter-em-up and shows that he’s lost none of his love for over the top violent spectacle.

This is the tale of Django (Jamie Foxx), a slave who is freed by a German bounty hunter by the name of Dr. King Schultz (Christoph Waltz) so he can help him find some notorious high value wanted criminals. Django has the additional motivation that he wants to free his beloved slave wife Broomhilda (Kerry Washington) from her evil plantation owner Calvin Candie (Leonardo DiCaprio having a ball in a brilliantly slimy performance). 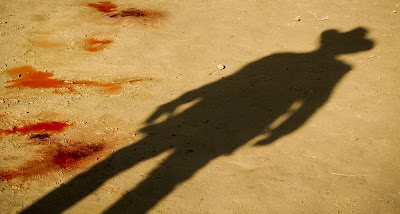 Candle is backed up by a grim assortment of scumbag lowlifes and his personal valet Stephen (Samuel L Jackson who also delivers another worthy role to his illustrious CV).

Foxx is excellent, all mean moody looks and cutting one-liners and there is real chemistry with Waltz as the twosome cut a swathe through the criminal underworld. Tarantino keeps the pace moving even if the film feels indulgent in places.

There are some great comedy scenes too including a superb mass argument between the members of a racist posse about the eyeholes in their makeshift bag masks that you’ll not forget.

The cinematography is excellent in the capable hands of Robert ‘Hugo’ Richardson, the scenery is gorgeously used to great effect too. You know going in to a Tarantino film that it will have a distinctive, film reference heavy vibe and this time the many Western genre staples that have been liberally sprinkled through his other films are given free reign in their ‘home’ setting of the prairies of pre-Civil War Southern America. 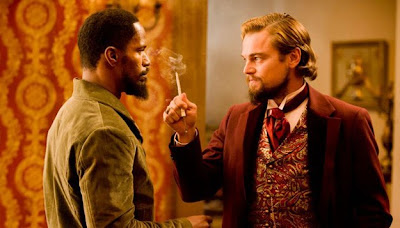 Whipping up a storm on the issue of slavery and all the associated inhumane cruelty is uncomfortable to watch at times, but seeing the slave master villains brought low is something that everyone can certainly get behind. Django Unchained is a riot of quality gun slinging mixed with the trademark Tarantino banter. Sure the language is offensive and the violence bloody but the sheer energy of the filmmaking keeps you hooked even if not everything works.

Revelling in the themes of justice, friendship, trust and honour, this is a comprehensively entertaining adventure that will delight Tarantino fans and most likely win him some new ones too.
Out of a potential 5 you have to go with a Darkmatters:

öööö - Payback has a new name

Horror ööö – gets a bit nasty

Spiritual Enlightenment öö - they were bad men and deserved what was coming! 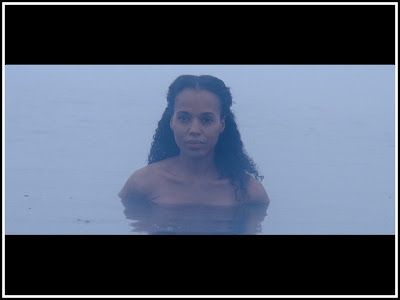