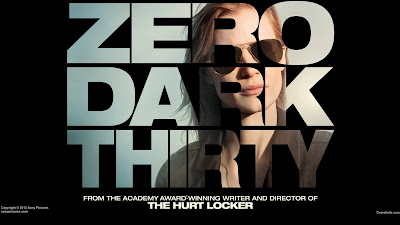 “I'm going to smoke everyone involved in this op and then I'm going to kill Osama bin Laden.”

Saddle up for Kathryn ‘The Hurt Locker’ Bigelow’s heavy duty Homeland-esq dramatic retelling of the U.S. hunt for Osama bin Laden. The title comes from the military term for the time when the secret stealth choppers packed with heavily armed Seals took off for their strike on the fortified house where the world’s most wanted man was holed up - 30 minutes after midnight.

Zero Dark Thirty is a serious, gritty take on the story of what could be history's greatest manhunt for the world's most dangerous man. The cast includes an amazing lead performance from Jessica ‘Tree of Life’ Chastain as Maya – a CIA operative who dedicates years of her life to bringing Bin Laden down. 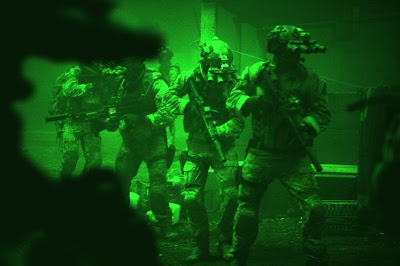 "double XP for whoever gets the kill"

Everything is presented in a dusty, hyper-realised intensity which makes for powerful watching even if much of the film is spent with deskbound research and meticulous following up of leads… Which is where the controversy around the film kicks in because most of the leads that the CIA have are sourced through torturing detainees at their various ‘black’ camps. Whatever your feelings towards al-Qaeda – on a purely human level it is very hard to see suspects being interrogated and waterboarded, beaten and humiliated. It is unflinching and grim business led by ‘specialist’ Dan (Jason Clarke) who tells one suspect “In the end, bro, everybody breaks…It’s biology.”

Most of the movie is build up, there is very little real ‘action’ as in gunfights etc, which means that by the time the actual ‘take down’ mission takes place you’re really ready for it. Watching the sleek stealth helicopters hug the contours of the Afghanistan landscape on their way into Pakistan – in the darkness, with only what the bosses describe as a ‘soft 60%’ chance that Laden is actually in the building they will hit is when the adrenalin kicks in. The fact that the commandos almost manage to fumble their mission despite all their bravado only makes it feel all the more ‘real’. It’s like playing Medal of Honor or Call of Duty on a PS3 – sharp visuals but not necessarily perfect execution (if you pardon the term in this context). 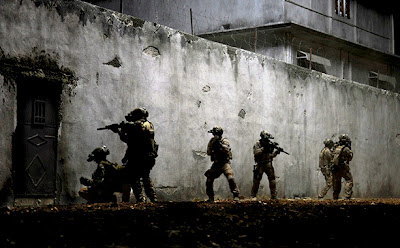 Getting a ringside seat for the mission that took place in the early hours of 2 May 2011 – is the ultimate ‘money shot’ for most of the Western World, and Zero Dark Thirty delivers on that even if the buildup is slow and in some places less than compelling.

The internal battling between the CIA suits – embodied by Mark Strong who at one point yells “We are failing! Bring me people to kill!” is believable and the frustration felt by Maya that her superiors drag their feet at almost every turn is palpable.

Everything is well edited, and the camerawork is certainly worth taking a step back to admire. Whether or not this is trip you need to take depends entirely on your world-view and tolerance for nitty-gritty investigative procedural process.

Laughs öö – darkly amusing in places but no comedy!

Horror ööö – the torture is grim

Babes ööö – I have a lot of love for Jessica Chastain

Spiritual Enlightenment öö - "justice" but at what cost?