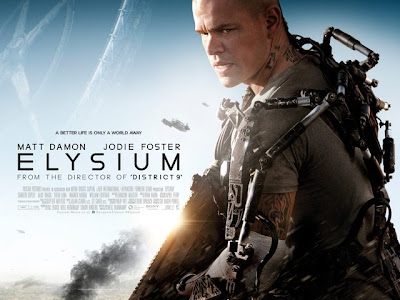 - Read another version of this review in The Luton News

The near future wants a word with you. 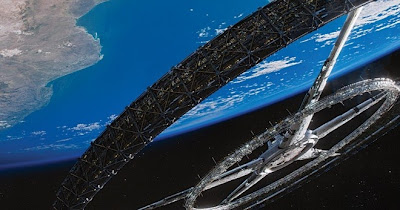 In the year 2154, the wealthy will have mostly left earth to live on Elysium - a man-made super space station - in complete luxury while the rest of the population starve on a ruined Earth.

But even though things are incredibly bleak down here, there may just be one man who can make a difference. One man who will fight for the abandoned people of earth and maybe, just maybe change the balance of power forever…

Step forward Max (Matt Damon) – he’s a bit of loose cannon, has a long criminal record specialising in GTA but he’s also an idealist, and he’s in love which could be a dangerous combination. 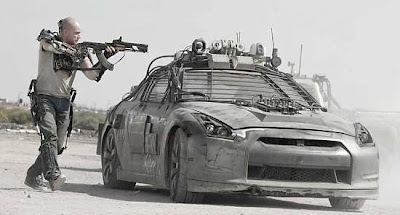 One day Max is working away in the factory where advance combat / security cyborgs are created when he accidentally gets locked into a decontamination chamber and given a lethal dose of radiation. Now the clock is ticking as he has five days to live. Five days to try and make good on his childhood promise to his beloved Frey (Alice ‘Predators’ Braga) that he will get her to Elysium.

From this moment onwards the film is all about Max’s mission – he gets tooled up with a mech-like exoskeleton and promised a ticket to Elysium if he can kidnap a corporate bigwig and download the guy’s brain info.

Easy right? Well whilst getting the brain of the target John Carlyle (William Fichtner) only means taking down his robot bodyguards – it seems that what he his hid in his noggin is of upmost importance to Elysium security enforcer Delacourt (Jodie Foster). She’s not a people person. In fact she shoots down innocent transport shuttles full of families just for trying to get to Elysium. And she has a secret weapon in the nasty form of a super soldier named Kruger, yes like Freddy. Sharlto Copley has masses of fun as this kick ass villain (Copley was the hero in Director Blomkamp’s last film District 9). 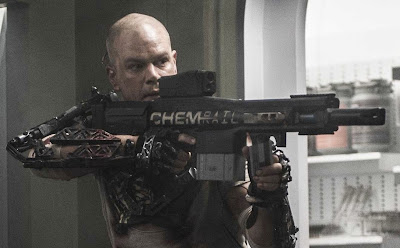 "The Bruce Willis haircut is big in the future"

Cue gunfights, desperate plans and a fantastic showdown between Max and an equally exoskeleton enhanced Kruger which has to be one of the best climatic big screen one-on-one battles this year.

Elysium is a smart, gritty sci-fi movie that delivers a decent thrill ride and carries a good moral message at heart too. Recommended. 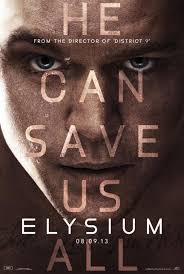 Good review Matt. It's not as thought-provoking or as emotionally-wrecking as District 9 was, but still a fun thrill-ride nonetheless.