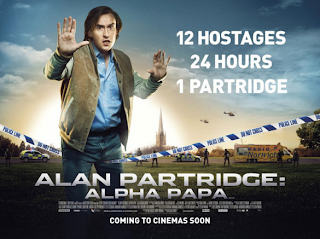 I’m Alan Partridge “Aha!!” and this is my trusty Sidekick Simon (Tim Key) – today we’ll be asking the important questions such as which is the worse kind of mongers - iron? fish? or war? And for all my fans out there I’m delighted to let you know that I’ll be appearing at your local cinema this week.

Yes Alan Partridge: Alpha Papa is the long awaited big screen debut of Norfolk’s one-man chatshow machine and this is his most desperate hour. His beloved radio station has been taken over by corporate giants Glendale Media who plan to rebrand the North Norfolk Digital as ‘Shape FM - The way you want it to be’.

"in this scene you need to look at the reflection in his glasses!"

With cost cutting high on the priority the new board decide that either Alan or the equally uncool DJ Pat Farrell (Colm ‘Gene Hunt in the US version of Life on Mars’ Meaney) must go - Alan wastes no time in telling them to “Just sack Pat!”

Alas after being given 30 minutes to clear his desk, Pat goes on a violent gun rampage at the radio station where he kidnaps a number of the staff and to make matters worse – he’ll only negotiate with the police through Alan.

So the scene is set for massive misadventure on a scale that only the sensible jumper-wearing hero can deal with. And the good news is that it’s an absolute blast of Alan-esq comedy as he bumbles his way through a life and death situation (which might just bag him the prized breakfast show – if he can survive).

"someone call The Sweeney?"

Packed with laugh out loud moments and a genuinely witty script that jams in cutting social jibes such as when he advises Simon “Never criticise Muslims. Only ever Christians, and maybe the Jews a little bit.” You’ll be busy spotting the visual gags as well as cringing at Partridge’s selfish foolishness.

The action cracks along to a startling climax, which along the way sees Alan making a trouserless appearance on national TV news and the excellent Felicity Montagu back as Alan’s long-suffering assistant Lynn who herself becoming a media sensation. 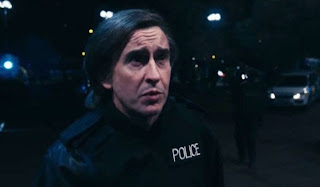 British TV comedy doesn’t always work on as a cinematic experience but Steve Coogan’s greatest creation is on top form here and there’s plenty to relish for long-term fans as well as newcomers to the whole Alan Partridge phenomena.

Spiritual Enlightenment öö – let's all ask those 'big questions'!
Posted by Matt Adcock at 11:47 am