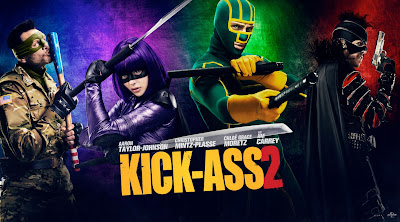 When KICK ASS burst onto the cinema scene in 2010, Mark Millar kinetically blew the doors off the whole comic book genre - and it was something wonderful...

Yes KICK ASS was ultra violent and OTT sweary but got up the nose of The Daily Mail and to readers of comics it was the freshest, most exhilarating ride for years. Now here comes Kick Ass 2 - again based on the Mark Millar/John Romita Jr cutting edge comic books but this time helmed by Jeff 'Never Back Down' Wadlow. 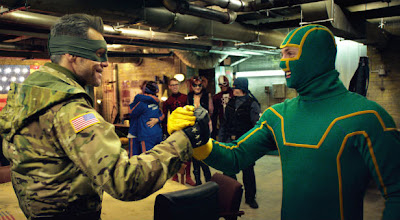 This is a true 'The Empire Strikes Back' to the original's 'A New Hope' - we find Dave Lizewski /Kick-Ass (Aaron 'Savages' Taylor-Johnson) a conflicted soul. Having brought down the big crime boss at the end of the first film, he's now buffed and ready for more crime fighting but in need of a partner or team. Luckily Kick Ass's antics have inspired a whole raft of wannabe super-heroes and he is soon invited to join Justice Forever a rag-tag bunch of crime fighters led by born-again Christian Colonel Colonel Stars And Stripes (a great turn from Jim 'The Incredible Burt Wonderstone' Carrey).

But every hero needs a nemesis and Kick Ass has his in the shape of Chris D'Amico (Christopher Mintz-Plasse) whose dad Kick Ass killed. Styling himself as the world's first real supervillian (even though his only 'power' is his warped mind and tons of cash) he adopts the censor baiting name The Motherf%£;*£;#;^r – and raises an evil army to exact revenge.

Meanwhile Mindy Macready / Hit Girl (Chloë 'soon to be the new Carrie' Grace Moretz) has sworn to give up her vigilante ways and try to fit in at high school - a fun subplot which sees her rubbing up against bitchy babe Brooke (the upcoming Claudia Lee). Cue cheerleading, dates and Mean Girls-alike teen strife - all of which are all alien to Hit Girl. 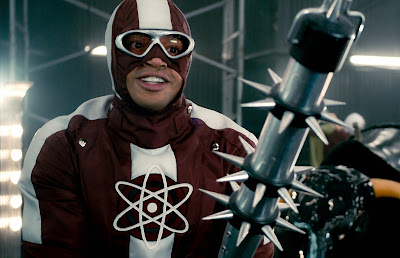 "try and enjoy it - otherwise 'what's the point?'"

Incredibly KickAss 2 manages to bring the various elements together in a joyfully profane and crunchingly violent super-sequel that had the audience I saw it with cheering out loud. Whilst it might not be as fresh as the first film, Kick Ass 2 brings megaton comic book thrills and beats you to within an inch of your life with them...

Prepared to feel the Kick Ass shock and awe all over again.

There are some fantastic homages too including the aforementioned Mean Girls but also classics like Ferris Bueller and a ton of Superhero flicks as you'd expect. There is a genius, subversive, sick and funny mind at work here be warned: Kick Ass 2 isn't for the faint of heart!!

Extended gallery (some pics thanks to 'HeartAttack')

"it's going to kick off" 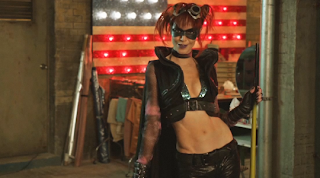 Problems with its tone, but still fun and entertaining for what it is. And what it is, is a sequel to Kick-Ass. Good review Matt.