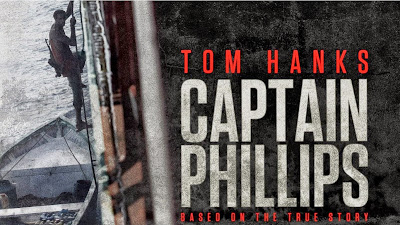 
“Attention Maersk Alabama, you should alert your crew, get your fire hoses ready. Chances are the approaching skiffs are just fishermen.”


Captain Phillips: “They're not here to fish.”


And indeed the Somalis who come visiting the U.S. ship Alabama are not here to fish… Led by Muse (Barkhad Abdi) they are pirates intent on hijacking of the container ship and holding the crew to ransom.

"You can drop off my Oscar portside"

Captain Philips is a superb exercise in taught edge-of-your-seat thrills, the fact that it is based on real events only serves to make it all the more tense.


Star of the piece is Alabama's commanding officer, Captain Richard Phillips (two time Academy Award®-winner Tom Hanks), he’s on the form of his life depicting the brave captain who is prepared to risk everything for his crew.


This is totally Hanks’ film, he brings such a believable, tangible sense of fear to the screen that you’ll be deeply moved and find yourself forgetting that he’s acting. Speaking of which, the actors portraying the Somali pirates weren’t introduced to Hanks until they started filming the pirates taking over the captain's deck. Greengrass said in an interview that he did this intentionally to build up tension between the actors on board the ship and the actors playing the pirates.


The Somali actors are excellent too, even though most of them hadn’t acted before – they bring authentic desperation and danger to the plot, and their motivations are sketched out at the beginning with their fearsome warlord bosses forcing them into their criminal lives. 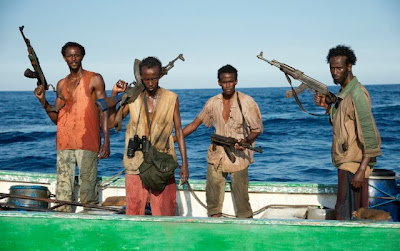 The action ramps up when the U.S. Navy SEALS led by their commander played by Max ‘Pacific Rim’ Martini are called in to try and rescue Philips. It is like seeing a PlayStation game come to life as the snipers desperately try and lock on to the pirates and avoid shooting their hostage.

Along with the action scenes, when Muse and Phillips collide verbally, the sparks really fly, these might both be men at the mercy of forces beyond their control but the sheer battle of wills is awesome to behold.


Captain Philips is very well crafted film, stunning cinematography and acting that must see Hanks up for another Oscar makes this a tense thrill ride that you really need to witness on the big screen!

Laughs öö – not a comedy 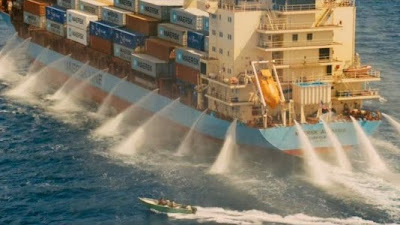 "The advanced shower system was playing up..."