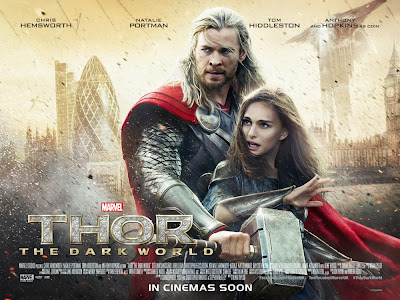 Read the newspaper version of this review here: THAME GAZETTE


“Some believe that before the universe, there was nothing. They're wrong. There was darkness... and it has survived.”

Desperate times are afoot as in the aftermath of Avengers Assemble and Iron Man 3, earth and all the 9 realms are faced with an enemy that even Odin and the forces of Asgard cannot withstand… So it’s up to the hunky Thor (Chris Hemsworth) to step up and embark on his most perilous and personal journey yet – to face down a challenge so great he’ll even need to team up with his highly untrustworthy half brother Loki (Tom Hiddleston).

Thor: The Dark World brings a new baddie into play - Christopher Eccleston's dark elf leader Malakith who has a plan to plunge the entire universe into darkness. As luck would have it though, sexy earth scientist Jane Foster (Natalie Portman) has managed to get herself possessed by the very freakish energy known as ‘Aether’ that Malakith is after to fulfill his wishes. 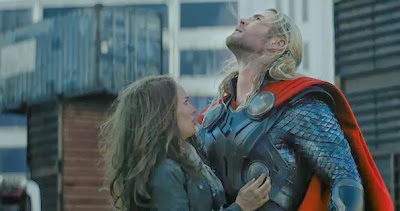 Cue Thor and Loki going all out to try and save not just the universe but Foster’s cute butt in particular!? Demi Gods eh?

This being a Marvel Phase 2 film, the production values are superb – with action set pieces that feel fresh and deliver the requisite thrills plus a decent amount of humour keeps the whole film fun and light hearted.

As a Brit it is especially cool to see Thor battling dark elves on the streets of London, plus there are some great laugh out loud incidental pleasures such as Thor getting the tube and having to ask how many stops to take, or politely hanging up his hammer on a coat hook when invited in to a London flat. 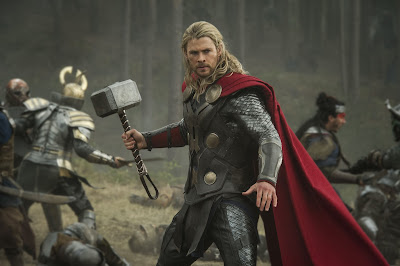 Alan ‘Game of Thrones’ Taylor takes over the directing duties from Kenneth Branagh and Joss Whedon and proves adept at bringing exciting super combat to the big screen. Hiddleston as Loki steals the show with his excellent acting but it’s no wonder as he is given some juicy fun elements to play with including transforming into one of Thor’s Avengers pals, just to mock him.

Hemsworth might not be the best actor in the world but he sure looks the part… For the female comic book fans there is even a slow-motion scene of him washing topless!?

The rest of the cast do well with the fantasy material, Stellan Skarsgård is noteworthy as comic relief as Dr Eric Selvig and it’s always nice to see Kat Dennings.

My esteemed pal Tom Wade was moved to poetry by Thor: The Dark World... Apologies in advance but it goes like this:


I saw Thor, it wasn't a bore,
it's got beards on jaw, a chiseled core,
you will not snore, it's really top drawer,
Marvels' word is law...

It goes on but you probably get the gist!?

Overall this Thor sequel is a comic book joy that all Avenger fans should see!

Awesomeness öööö – nothing but a good time

Babes öööö – Portman is yummy, but so are Dennings and Jaimie Alexander