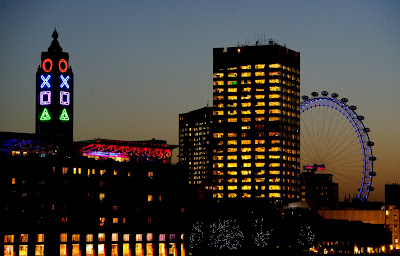 After seeing the US blow the doors off the whole console launch thing with over a million PS4's being sold in one day - we're now fast approaching the UK (and wider Euro) launch. LINK

Nice to see SONY lighting up the London sky with their iconic PlayStation controller symbols on teh OXO tower! Also interesting to see England's future king tipping the PS4 as the console of choice: HRH wants a PS4

Here's the UK TV advert which is packed full of PlayStation Easter Eggs:

Later this week Darkmatters will be attending an cool screening of our favourite movie DRIVE at the awesome Den of Geek's Need for Speed: Rivals launch party!