The Hobbit: Battle of the Five Armies

The Hobbit: Battle of the Five Armies (12a)

“You have but one question to answer: How shall this day end?”

The end of the beginning is here… Prepare for fiery death, sumptuous fantasy lore and high drama as Peter ‘Lord of The Rings’ Jackson brings his last Tolkien-em-up to the big screen.

"Yep - the orcs are here to party"

It’s been a lavish big budget and reasonably satisfying ride – kicking off with the lightweight ‘An Unexpected Journey’ and following up with last year’s Dragon-tastic ‘The Desolation of Smaug’ – here we have the conclusion which packs a handy plot synopsis in its title as the ‘Battle of the Five Armies’ takes centre stage.

Kicking off straight away from the end of the last film we get to see the fearsome dragon Smaug (Benedict Cumberbatch) bring hot destruction to the poor people of Lake Town. But no sooner has the (plot spoiler) big lizard been vanquished by strapping heroic Bard (Luke Evans) – then all kinds of chaos breaks out as the lust for his now ownerless dragon hoard of gold attracts many interested parties. First up the dwarves led by Thorin Oakenshield (Richard Armitage), the humans with Bard as their main man, the fabulous elves under the command of Thranduil (Lee Pace) and lets not forget to mention the dastardly orcs who have the grievous Azog who comes to wipe out all the rest…

OK that’s four armies right there, so throw in some air support eagles led by wizardy Radagast the Brown (Sylvester McCoy) and we’re game on for over an hour of impressive CGI total carnage.

Everything crackles with nerdy Tolkien attention to detail, the orcs are nastier than ever, the fights more violent and the peril ramped up as high as it can be (cos as this is prequel land we know whose definitely gonna make it).

Sadly ‘Battle’ still suffers from the same shallowness that has haunted all the Hobbit films when compared to the masterful ‘actual’ Lord of The Rings trilogy. But there is a ton to love here and if you’ve taken the hobbit journey so far – you’ll need to see it through to the satisfying end!

Spiritual Enlightenment ööö – the road goes on forever but has to end... 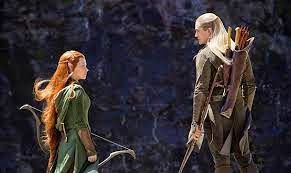 
Read Darkmatters review of The Hobbit: The Desolation of Smaug

Read Darkmatters review of The Hobbit: An Unexpected Journey

Like the others in the trilogy, it's fine. Fun for what it is, but not too much else. Good review Matt.