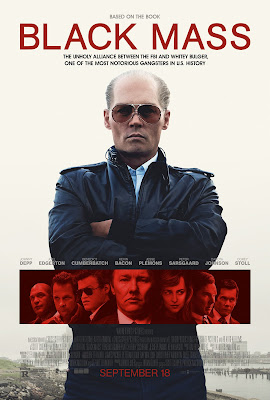 “It's not what you do, it's when and where you do it, and who you do it to or with. If nobody sees it, it didn't happen.”

How far should the authorities go in order to take down powerful criminal networks like the Mafia?

Well Black Mass, based on the 2001 book Black Mass: The True Story of an Unholy Alliance Between the FBI and the Irish Mob by Dick Lehr and Gerard O'Neill tells the truly disturbing tale of boundaries well and truly crossed.

"not a guy you want to cross"

The plot involves infamous crime lord James "Whitey" Bulger (an astonishing turn from Johnny Depp), his Statesman brother Billy (Benedict Cumberbatch) and FBI Agent John Connolly (Joel ‘The Gift’ Edgerton) who all grew up together on the mean streets of South Boston.

Beginning in the 1970s an uneasy alliance is concocted which saw Whitey tipping off the FBI via Connolly about rival criminal activity in return for protection from the authorities and freedom to do pretty much whatever the hell he wanted. It would make a scary fiction but it’s even more terrifying to think that something along these lines actually happened.

Connolly is portrayed as a good guy trapped between his friendship with Irish Mob Boss Whitey and his duty to the FBI. Billy is the respectable face of the family whose influential position is also endangered by Whitey’s out-of-control bad deeds. Then there’s Whitey himself - he is a compulsive negative force of nature which destroys or tarnishes everything he comes into contact with.

As Boston's Italian Mafia get taken down - Whitey more than makes up for that with murders, dealing drug, racketeering, kidnapping or as the new Prosecutor Fred Wyshak (Corey ‘Ant Man’ Stoll) says ‘he seems to be behind every crime in the state’… 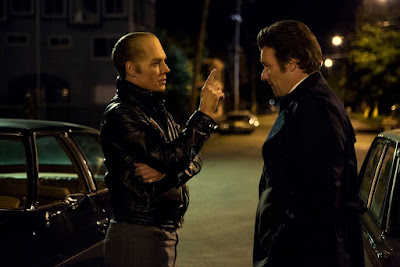 Director Scott Cooper brings the ‘70s to the big screen in fine style and gives Depp license to go ‘all out’ and chill the audience to the bone and he absolutely delivers. Depp plays Whitey as a fearless, coolly calculated predator who you cross at your peril. This is a timely reminder of just what an incredible actor Depp can be when given decent material to work with.

As a Christian I’m not in the general practice of encouraging people to enjoy a ‘Black Mass’ but if you’re in the mood for a sublime crime-em-up this should be top of your to see list. It would be criminal to miss it!

(4 - Putting the fear back into the criminal genre )

Horror ööö – gets nasty and wince inducing in places

Spiritual Enlightenment öö - who will save us when the law won't?