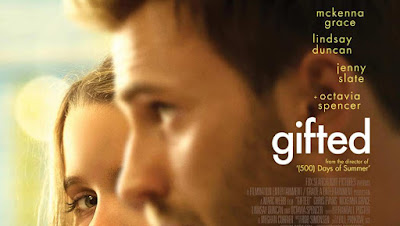 “He's a good person. He wanted me before I was smart.”

Mary (Mckenna Grace) is a special young girl, she might actually be a genius but her life isn’t easy. Adopted by her good hearted uncle Frank (Chris Evans) after her mother took her own life. Mary and Frank survive in run down accommodation along with their one eyed cat ‘Frank’ and friendly neighbor / landlady Roberta (Octavia Spencer). Life is good and they are happy together, until that is Mary starts school and is immediately identified as ‘gifted’.

Things get complicated when the school’s Headmistress alerts Frank's formidable British mother Evelyn (Lindsay Duncan) who plans to send Mary away to a special school where her gifts can be explored fully. Also on the scene is Mary's teacher, Bonnie (Jenny Slate), who becomes romantically involved with Frank in the midst of his court battle to try and keep Mary.

"Caution - this film might make you want a daughter"

Gifted could have been a mushily sentimental parent-em-up but in the capable hands of Director Marc ‘The Amazing Spider-Man’ Webb the film fizzes with wit and fun as well as anguish and tension. The central relationship between Frank and Mary has winning real chemistry, Evans’ nonchalant wounded but sexy single surrogate dad is made more believable by Grace’s superb performance that balances precociousness with cutting insight and real heart. These are characters you can’t help but care about.

The payoff is in the custody battle where Evelyn does all she can to discredit Frank and force Mary into being the child prodigy that her own troubled daughter was. It’s moving stuff and is liable to keep you on the edge of your seat as Mary’s future hangs in the balance. The difficult issues of suicide, child welfare and single parenting are all noted but not dwelled upon – keeping the core of the film on Mary’s situation. 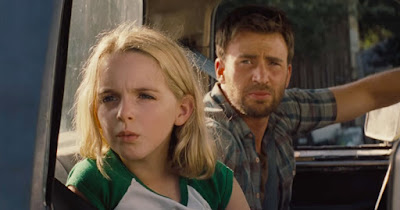 Along the way there are great moments as Frank and Mary ponder things like ‘is there a God’ whilst playing on a beach or take a speed boat out for a ‘test ride’ on Mary’s insistence – taking Frank the cat along for the trip. The gentle pace never sags and the ending packs a satisfying punch.

Gifted is a joyful film to watch, nicely shot and acted, and a welcome change of pace for viewers as the summer action blockbusters line up in the coming weeks.
Treat yourself to some gifted viewing!

Awesomeness ööö – Individual scenes shine but it all works