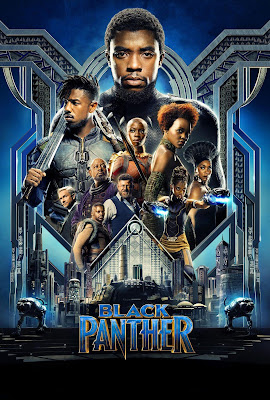 “I have seen gods fly. I have seen men build weapons that I couldn't even imagine. I have seen aliens drop from the sky. But I have never seen anything like this.”


Here we go then with another Marvel super-em-up which follows on from Captain America: Civil War, and it’s a rip-roaring challenge to those who think they might be getting a bit bored of these comic book movies.

The plot sees Black Panther / King T'Challa (Chadwick ‘Gods of Egypt’ Boseman) returning to his homeland Wakanda to be their new leader after his father’s assassination. Things are a little tense though as there are some who would challenge his right to rule and question his stance on the country’s advanced technology and weaponry. 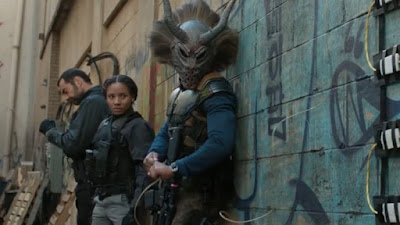 What follows is a dazzling cinematic romp packed with action, humour and strong messaging about racism, injustice and the hunger for revenge. Much has been made of the fact that most of the cast is black but the truth is that the film is so strong it never feels forced.

When the outcast mercenary Erik Killmonger (Michael B ‘Creed’ Jordan) challenges T’Challa’s throne with a view to take and use Wakanda’s technological might to liberate and arm racially oppressed African Americans around the globe – it takes the film into areas of questioning not just revolutionary rhetoric and the responsibilities of leadership.

T’Challa can sure kick ass in a fight but he is a well-rounded character who behind the mask is a sensitive guy wanting to do what’s right not just for his people but for the wider world too. 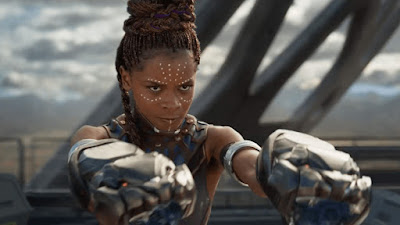 "don't mess with her"

This is a film that empowers its female characters – to the point that they often take centre stage and outshine the men. T’Challa’s sister Shuri (Letitia Wright) is the Wakandan tech scientist who designs Black Panther’s awesome weaponry and gadgets. Angela Bassett brings maternal wisdom as T’Challa’s mother Ramonda and Nakia (Lupita ‘Star Wars: The Last Jedi’ Nyong’o) is every bit a match for the Black Panther as a strong-willed agent and potential love interest. 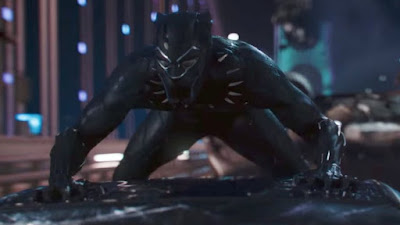 "does whatever a panther can, erm"

Black Panther is a triumph, a great addition to the ongoing cinematic antics of the Avengers and an all-round crowd pleaser – a new King has been crowned.

Awesomeness öööö  – Super stuff all round


Spiritual Enlightenment öööö - A true heart is worthy of a King
Posted by Matt Adcock at 1:27 pm