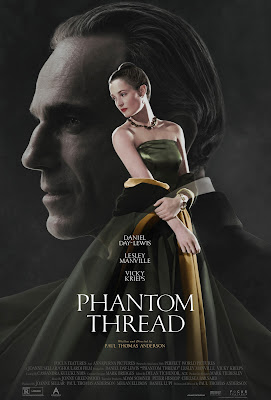 
“It's comforting to think the dead are watching over the living. I don't find that spooky at all...”

When does a relationship become obsession? Welcome to the glamourous 1950s where in post-war London, renowned dressmaker Reynolds Woodcock (Daniel Day-Lewis) and his sister Cyril (Lesley Manville) run a successful fashion house.

The distinct style of ‘The House of Woodcock’ attracts women from royalty and movie stars, to socialites and dames. Woodcock himself is a dashing, charming and charismatic confirmed bachelor, until that is he crosses paths with a young, strong-willed woman named Alma (Vicky Krieps), who he simply cannot resist.

As Woodcock falls more and more under Alma’s spell, she becomes his muse and lover but he is not ready for the disruption to his carefully tailored life that this all-consuming love brings.

Phantom Thread is an intimate, delicate, and a beautifully crafted film, which is very much in the thought-provoking, unnerving vein of director Paul Thomas ‘The Master’ Anderson’s work.

Day-Lewis in what is possibly his final performance delivers a magnificent embodiment of the tortured Woodcock who simply does not know how to deal with the strength of emotion he feels for Alma. As she proves herself to be his match, her manipulation of him even takes on a sinister element that ups the fascination of their interplay.

Krieps and Manville are both great in their supporting roles too, bringing sharp female contrast to Day-Lewis’ obsessive and overbearing central character. Krieps, in particular, revels in the glamorous dressing up, being loved and using her own beguiling attraction to get what she longs for.

The central affair between the dressmaker and his muse is a truly intense romance to behold, but that doesn’t necessarily make Phantom Thread a good date movie. There are some disturbing elements along with breathless moments of pure expression. 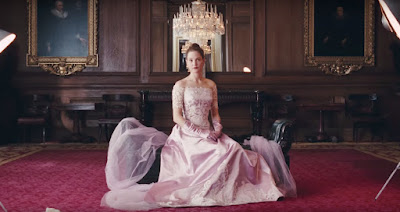 This is very much a film to let wash over you as the lavish cinematography and style evokes cinematic master-works like that of Stanley Kubrick. The plot takes a leisurely pace, letting the twisting knots of the characters’ lives weave together in a way that feels almost like a beautiful dress being created in front of you.

In the end, Anderson has made yet another transcendental and sublime work of art. Not one for action fans but a must-see for those who savour a deeper cinematic engagement. Go and get entwined in the threads of this phantom movie. 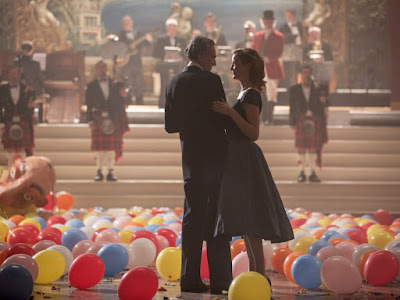