“As it turns out, I'm capable of much unpleasantness.”

Prepare for a subversive, mischievously dark and bawdy romp which takes you back to early 18th century England. Whilst a bloody and expensive war rages against the French, the English Court is more caught up in frivolous duck racing, gossiping and pineapple eating.

The ill-tempered Queen Anne (Olivia ‘Peep Show’ Colman) occupies the throne but it is her close friend and advisor Lady Sarah (Rachel ‘My Cousin Rachel’ Weisz) who really governs the country in her stead. 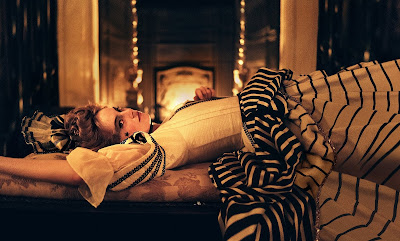 'prepare for both pride and prejudice'

Things get shaken up when Lady Sarah’s cousin Abigail (Emma Stone) arrives, down on her luck having been ‘lost’ by her father in a game of cards. But Abigail will stop at nothing to win the Queen’s ear, employing her charm and ruthlessness in equal measure – can she oust Lady Sarah as the queen’s ‘favourite’?

The Favourite is loosely based in fact, but it delivers big time laugh-out-loud, sublimely verbose royal and political antics. Far from a Merchant Ivory period effort – packing explicit language and sexual shenanigans alongside the razor sharp witty exchanges. Director Yorgos ‘The Lobster’ Lanthimos channels and builds on some of the excellently subversive vibes found in ‘Love & Friendship’ from 2016 – the result is an entirely enjoyable experience! 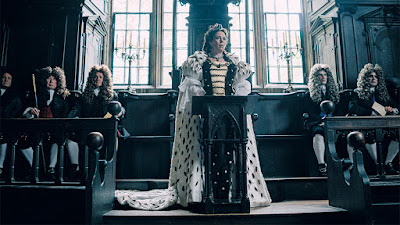 'The Queen in full effect'

Memorable scenes include Queen Anne’s hilariously impetuous outbursts at unsuspecting footmen, the vicious interplay between the two wannabe favourites and possibly the best / most ridiculous dance scene ever.

The cinematography is classy and the plot gallops along at pace. There are lots of juicy issues being explored here too from the overt weaponization of feminine traits through to dastardly manipulation and betrayal. The Queen’s sadness and possible mental health issues stemming from her loss of her 17 children – who she has replaced with rabbits to remember them by – is also heart breaking. 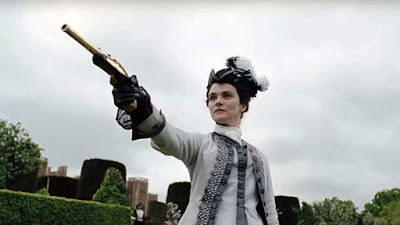 There are strong supporting roles from Nicholas Hoult as the politician Robert Harley who crosses swords with Lady Sarah and Joe Alwyn as Abigail’s love interest / ticket back to aristocracy Samuel Masham.

Watching the two leading ladies locked in a battle of wits, with the Queen’s favour the prize, is diabolical fun that pulls no punches. It’s not just the loyalties of the Court that are switched and played with as events take dubious twists – viewers too are in for an emotional rollercoaster ride.

The Favourite might well live up to its name – a cracking start to the year.

(5 - An excellent, memorable and untamed experience)

Spiritual Enlightenment ööö - Who can you trust?