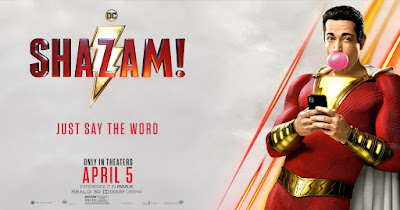 Before we get to the serious super-fallout of Marvel’s Avengers Endgame, the DC Extended Universe bursts onto the scene with Shazam – a light-hearted romp which is a change of tone from the darker and moody recent efforts.

Director David ‘Lights Out' Sandberg channels a lot of the fun that you remember comic books inspiring when you’re a kid, Shazam! packs a serious amount of wish fulfilment and sheer wonder too.

Meet young Billy Batson (Asher Angel), your standard hard-luck orphan who has a Hunt For The Wilderpeople penchant for running away from the foster homes where he has been placed since he lost his mother at a fair as a child. As fate would have it he Billy gets chosen by ancient wizard Shazam (Djimon Hounsou) to become mankind’s champion and he is given a range of superpowers with which to defend the world.

So, when Billy says the word ‘Shazam!’ he transforms into the super-buff Zachary Levi and has a ball with his newest foster brother Freddie Freeman (Jack Dylan Grazer) chronicling his abilities. Freddie is handily a swot on superheroes and has his own stash of memorabilia including an ‘actual’ Batarang and ‘authentic’ bullet which bounced off Superman – which lays nice groundwork for connecting this film to the wider DC universe.

While this all feels a bit like a super version of Tom Hanks' Big – there is, of course, a baddie to up the ante. Villain of the piece is the bitter Thaddeus Sivana (Mark ‘Kingsman’ Strong) who was once tested by the wizard to inherit his powers but found to be a wrongun, so he instead opted to let himself be possessed by the ‘Seven Deadly Sins’ – demonic-like creatures who want to kill us all.

The action is handled well, it’s shot through with human emotions and related complications but it’s also really funny too. The humour really works and there are lots of grin-inducing moments, none more so than a cameo at the end which is just superb. 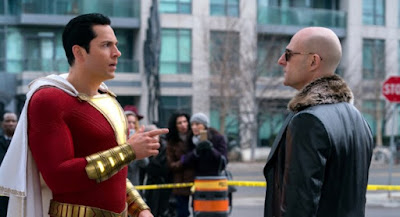 All the cast seem to be having a good time, special mention to the young Faithe Herman (future star alert) who plays younger foster sister Darla Dudley and steals every scene she’s in.

Shazam! is a marvel (excuse the mixed comic book analogies) – a feel-good, fun and exciting new entry into the super world which deserves to be seen! For a super time simply say ‘Shazam!’ when ordering cinema tickets!!

(4 - Super fun which deserves much love!)

Horror ö – Not too nasty

Spiritual Enlightenment öö - Magic can save you!