Matt meets The Man With No Name (review) 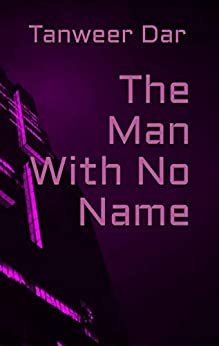 The Man With No Name

“The neon lights cast a pink and blue glow over the glistening wet road…”
The Man With No Name is a fun bite-sized cyberpunk novella in a world that owes a debt to a myriad near futures we’ve seen on screen. Author Tanweer is obviously a fan of movies and you get that cinematic almost script like feel. I enjoyed the virtually shared lore with Complete Darkness where everyone has a Headchip – except here one man remains unchipped – no prizes in guessing that this is our unnamed hero.
In this bleak and sparsely populated tale, the titular Man With No Name fights a lonely battle to try and prevent our freedom being overwritten by a bio/tech fusion – this is a nice touch beginning to blur the lines between biology and technology. It all cracks along at a good pace and there are some good action set pieces. I felt in places the author over details passages – conversations are full of ‘he / she saids’ and the prose doesn’t flow easily. This is in contrast to the characters who don’t get much flesh on their bones. There are also some stock descriptions that come up again and again about the black muscle car the hero drives. Not being too complex does mean that this would be a good taster cyberpunk for young adult readers.

Street drive...
I asked Tanweer about his inspiration for the book, he said: “The Man With No Name is a novella set in a dystopian world. It’s a world in which most people have surrendered control to an almost omnipotent corporation, which can track them and their actions at will. This is largely due to the fact that everyone is chipped. They gain access using their chips, are identified via their chips, and pay for transactions.
Into this cyberpunk setting comes a shadowy figure, a man with no chip, and no name. Protected from the corporation by his mother, he now seeks to find justice for what happened to her – and in turn, him. Coupled with the rapid development of Artificial Intelligence, this quest leads to enormous, unintended consequences.
In terms of inspiration, certainly, motifs and environments explored in films such as Drive and Blade Runner, and to a lesser extent post-apocalyptic action such as Mad Max, are evident in The Man With No Name. At its core, however, is the very human story of a mother-son relationship and the search for the essence of freedom.”
If you’ve a hankering for a cyberpunk hit that you can consume in one sitting - this is a lightning-fast and enjoyable read. Will be interesting to see what Tanweer does with a longer novel.

Out of a potential 5 - you have to go with a Darkmatters:
öööö