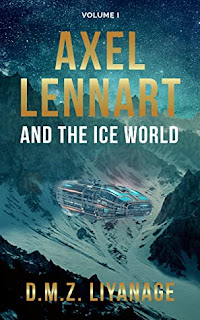 ‘You are lucky….for now. Should we meet again like this, I will have no option but to subject you to further questioning at the appropriate facility.’

On the ice-world of Eleusis, where the wind blows cold and the atmosphere is arctic, an ancient magic stirs.
Who or what is the 'Völvur' – tales are told of them being dark sorcerers from long ago but surely they are just tales, right?
In Axel Lennart and the Ice World we jump into a galaxy far, far away as hotshot pilot Axel Lennart as he crosses paths with the Unity Regime – tyrant rulers of Eleusis. But when Axel hears that the Regime is searching for an ancient Völvur artefact buried deep within the ice wastes, he lets his curiosity get the better of him. What Axel doesn’t know is that Völvur’s might still be a thing and they want it on their side…
Cue a search for an artefact known as the X-06 - not the latest Xbox but rather a relic that contains the mythical powers of the fabled dark sorcery. Axel’s fate is tied into that of the mysterious person called Raven and his quest to unravel the mystery plays out like a great episode of Firefly (my all time fav sci-fi show) crossed with Star Wars: A New Hope (my fav sci-fi film).
The references to classic sci-fi’s are multitude and fun to connect with – from the dangerous escaped Convict-5257 and fun range of droids – through to the weaponry and speeder bikes if you’re a sci-fi fan then there is plenty to make you happy here.
The story bounces along and is a fun romp – recommended for anyone who’s ever dreamed of adventure in the stars.
Out of a potential 5 - you have to go with a Darkmatters:
ööööö (5 - May the Ice World be with you!)
Click to buy your copy of Axel!!
Read more Sci-fi!!
Click this banner to find out more about my cyberpunk novel...