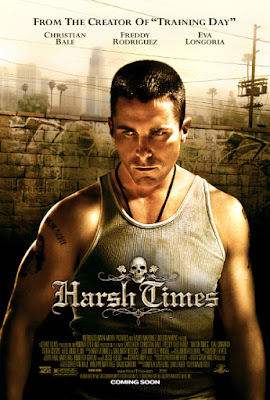 Harsh Times (15)
Dir. David Ayer
Reviewed by Matt Adcock
"I'm a soldier of the apocalypse, man - a stone-cold killer… A psyched out, mentally unstable nightmare on your doorstep and you want to know the best part? I’m going to be a cop real soon… Let’s be careful out there yeah?"
Times certainly are ‘harsh’ in this powerful directorial debut from ‘Training Day’ screenwriter David Ayer. Christian Bale excels as Jim, your average disturbed ex-US Ranger / heavy-duty American psycho, burning up the screen and damaging all who come into contact with him. That’s not to say that he isn’t trying to be a nice guy most of the time, just that he’s only ever a hair-trigger away from unleashing a world of violent pain on anyone who crosses him.
Harsh Times really is a kind of Taxi Driver companion piece and it’s every bit as good as Martin Scorsese’s ’76 tour de force. This time we have an alienated Iraq War veteran trying to get his life together back on civvy street but the phrase ‘own worst enemy 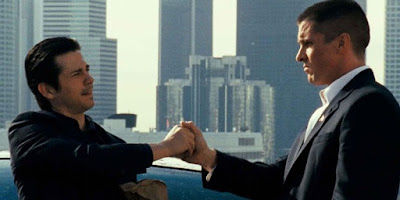 has never been so apt. Spending his days hanging out with his best pal Mike (Freddy Rodríguez) the two of them are trouble magnets despite their good intentions of finding jobs and settling down with their women (the gorgeous pair of Eva ‘Desperate Housewives’ Longoria and Tammy Trull). The film is incredibly watchable and the script sparkles with genius lines like when Jim surveys the other candidates around the Homeland Security training centre and deadpan quips “I see dumb people.”
Harsh Times deals in self-destructive black comedy of the highest order. The characters are ones which you will want to see survive, that you’d like to see make it to the dream happy-ever-after of meaningful employment and family life. But, however much fun the dodgy duo of pals get into – there is a creeping sense of unassailable, inevitable doom stalking the plotline and you just know that it will end in tears. Tears and heavy-duty gunplay quite possibly involving some scumbag Mexican gangbangers.
I can’t state enough just how astonishing Bale’s performance is here, he’s scarily convincing as a pure rage-fuelled powderkeg of anger. It’s all beautifully shot too with grainy handheld camerawork mixed with sweeping vistas which puts you right there on the mean streets of LA and Mexico.
If you’ve a hankering for an intense cinematic experience that will take you on a ride to the edge, Harsh Times will blow you away.
Darkmatters rating system (out of 5):
Action öööö – gunfights and beatings look very good here
Laughs ööö – some great moments
Horror ööö – brutal but not horrific
Babes öööö – Eva Longoria and Tammy Trull look bring the girl power