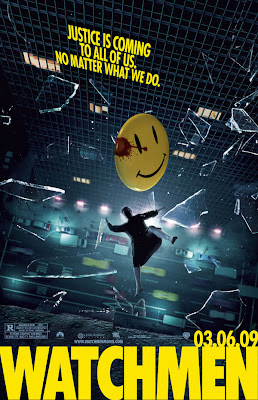 Rorschach's Journal: March 8th 2009: I find myself in the future – somehow a film has been made depicting the incredible events that occurred back in 1985 when this city was afraid of me. It had reason to, I had seen its true face. The streets were extended gutters and the gutters were full of blood. The accumulated filth of all their sex and murder foamed up about their waists and all the whores and politicians looked up and shouted 'Save us!' 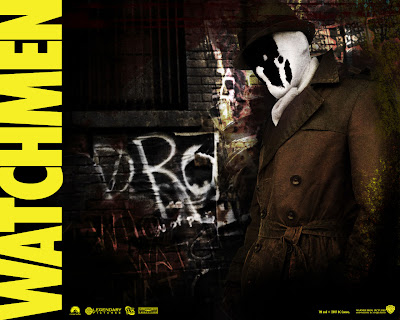 Welcome to the end of the Superhero movie as we know it. Zack ‘300’ Snyder has brought the once deemed ‘un-filmable’ landmark graphic novel by Alan Moore and Dave Gibbons to the big screen and nothing will ever be quite the same.

Watchmen is a nuclear powered behemoth of thought provoking superhero action, breathtaking visual flair and gut churning violence. I was prepared for bitter disappointment because the original comic boasts such a deep vein of rich intermingled sub plots, fantastical imagery and mind bending intellectual concepts – how could it be possibly be effectively captured in just under three hours of screen time? But to my delight and amazement Watchmen delivers on the big screen better than I dared hope. The sheer dedication and flawless attention to the source material is admirable, the vivid way that the original pages have literally ‘come to life’ in jaw dropping high resolution makes this a bona fide visual masterpiece.

For those seeking wham bang no brain action, this isn’t going to be for you because whilst there are some excellent action scenes, this is film that requires brainpower for maximum appreciation. Watchmen is a truly adult themed thriller, set in an alternative 1985 where Richard Nixon has won a third term as president and the Cold War has taken the world to brink of nuclear Armageddon.

After an excellent scene setting credit sequence we witness the murder of The Comedian (Jeffrey Dean Morgan), a mercenary / hero with dubious morals and a taste for carnage. His death sets one time colleague Rorschach, a masked vigilante (superb turn from Jackie Earle Haley) on the trial of whoever might be looking to execute masked heroes.
Writer Alan Moore said: "I suppose I was just thinking, 'That'd be a good way to start a comic book: have a famous super-hero found dead.' As the mystery unravelled, we would be led deeper and deeper into the real heart of this super-hero's world, and show a reality that was very different to the general public image of the super-hero."

The complex tale includes back story elements of the other ‘Watchmen’ including the only ‘actual’ superhero Dr. Manhattan (Billy Crudup), a naked, glowing blue skinned powerful being created in a science-lab accident. Manhattan is a walking talking weapon of mass destruction – used by Nixon to win the Vietnam War almost single handedly, but whose humanity seems to be retreating. Then there’s Nite Owl (Patrick Wilson) once Rorschach’s partner, a tech genius who sports a Batman like array of gadgets and wears an owl caped outfit.
Ozymandias (Matthew Goode) on the other hand is Earth's smartest man, who also boosts amazing reflexes and Silk Spectre II (Malin ’27 Dresses’ Akerman) who wears a mean skimpy latex outfit. 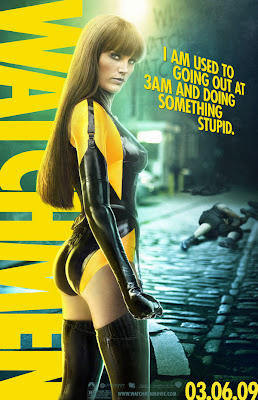 You’ll need to pay attention to keep up with the twisting plot elements as the storyline delights in pulling the rug from under the viewer. Don’t go expecting a simple spoon fed structure or a traditional blockbuster ending – we’re in serious end of the world territory here.

Some of the original graphic novel has obviously had to be cut – there will be a soon to be released DVD animated companion of the Tales of the Black Freighter pirate story within the story sub fiction. And we can only hope that there will be additional scenes restored for the rumoured Director’s cut Blu-Ray too.

Then there’s also a Watchmen downloadable PSN game (which from the demo I’ve played allows you to beat the living daylights out of convicts as either Nite Owl or Rorschach) and some tasty free Watchmen items in Home to nab. But most importantly to get the most from the movie, I can only really recommend that you swot up on the original graphic novel. It is the must read authoritative Old Testament without which we might never have had The Dark Knight’s New Testament…

Highly recommended, an intelligent choice for those who can handle extreme violence, superhero sex and challenging thinking. Repeated viewing essential. 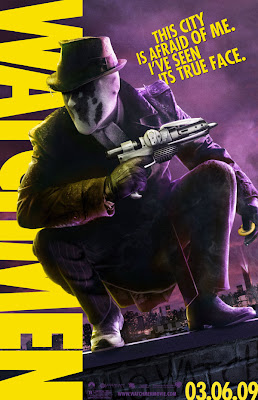 Matt - it seems we are doomed forever to disagree. I am a massive Watchmen fan but I'm afraid that if you're not a fan, then the movie is definitely not that great... A shame

hello... you may submit this blog to my webBlog Directory, keyworddir.info.. have a nice day!

Rorschach was an especially well developed as a character, that guy rocked