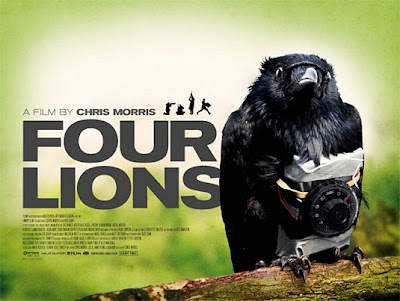 When it comes to taking your own life in an act of jihad, it seems all you really need to ask your self is:

“Do you want to be in the queue at Alton Towers…

or would you rather be on the Nemesis, Oblivion or the Rubber Dinghy Ride?”

If you choose to queue, then put down the nail bombs and stand quietly by.

This is the sort of dark dark satire that Christopher ‘Jam, Brass Eye, The Day Today’ Morris does best. Taking a character based approach to such an inflammatory subject matter as suicide bombers targeting the UK, Four Lions kicks your teeth in with incendiary, biting, wit mixed with cuttingly tragic repercussions.

Lead character Omar (Riz ‘Centurion’ Ahmed) is a decent chap, happily married, devoted father and yet also the ring leader of these ‘lions’ – for whom martyrdom has become a goal through which they want to strike a holy blow against the West. 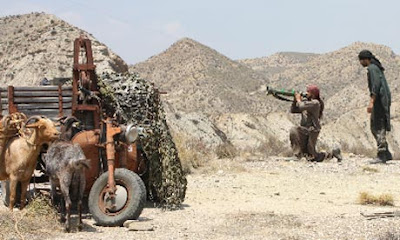 "these are not the men who stare at goats..."
His ‘crack’ team comprise of Barry (Nigel Lindsay), a white convert to Islam who agitates his new ‘brothers’ (is he really a racist underneath?) who thinks that the best target for their attack would be a mosque - to radicalise all UK Islamists. Also on hand is Waj (Kayvan ‘’Fonejacker’ Novak), a simple chap who often gets confused – and so if ripe to be encouraged to blow himself up.
Completing the set are the meek Fessal (Adeel Akhtar) – the only one who actually has some bomb making skills but who isn’t as convinced about the dying part, and Hassan (Arsher Ali) – a likeable wide boy who actually enjoys the British way of life.

The one thing they have in common other than their wish to be walking bombs is that none of them are very good at being terrorists… This is the film’s richest source of comedy gold as the group’s incompetence is manifest in many highly dangerous and completely shambolic situations.

At one point the news flashes a headline: ‘Asian Man’s Head Has Fallen Out Of A Tree’ which leads you ask just ’‘Who will survive and what will be left of them?’ This very real threat keeps your nerves ratcheting up whilst fate ticks down to their planned acts of atrocity… Morris is aided and abetted by Peep Show’s Jesse Armstrong and Sam Bain in bring a meticulous spotlight into the lives of these fictional followers of Islam. Despite the slapstick and stupidity on offer, underneath it has a very real feel to it, which makes you care for these enemies of the State. 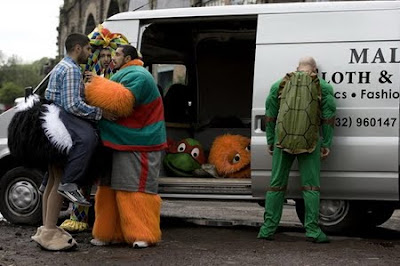 "best laid plans...don't often include outfits like these"
Four Lions is a tragedy as much as it a comedy but the laughs are frequent and brilliant… There is an unforgettable scene outside a terror training camp in Pakistan when two of the group are faced with a U.S. spy drone. The repercussions of their rocket launcher action only gets its full pay off if you watch through the end credits – it is this kind of set up that makes the film fly.

It isn’t just the bumbling terror cell that cops comedy flak from Morris though, my favourite scene sees police sharpshooters arguing about whether a bear is a type of Wookiee – and targeting the wrong fancy dressed runner as a result.

As a Christian I found the depiction of the Islamic faith interesting – one of the bombers has a taking teddy bear that is programmed to say his prayers to Allah for him… Yes Morris fearlessly goes for the comedy jugular even in matters that many comics would shy away from.

In the end Four Lions will leave you dazed and confused, challenged and inspired. This is a brilliant film that deserves to be seen – prepare to laugh, cry and wince, probably all at the same time!!

The 'Four Lions' get drafted into the England Football Squad when Capello thinks they are an upgrade of the 'Three Lions' (on the shirt)!?

I do like a very good analysis of the film. This is such a clever and original comedy film.