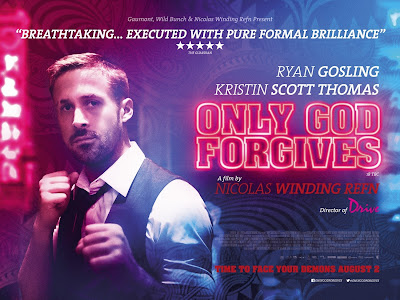 Come with me to Bangkok for an overdose of stylish vengeance - helmed by the awesome Nicolas Winding Refn who directed DRIVE (one of my all time fav films)...

Meet Billy (Tom 'Cleanskin' Burke) he's the eldest brother in a nasty crime family - and before the viewer has even had chance to get their heads around the incredible cinematography of the film - all blood reds, neon yellows and oppressive darkness, Billy has brutally murdered a young girl.

So the 'extreme' button is pressed right from the start and Only God Forgives never lets up... Billy is caught in the act and yet rather than arrest him, the police investigator named Chang (Vithaya 'Hang Over II' Pansringarm) — let's the dead girl's father take out his wrath on Billy...

Let's just say that it doesn't end well for Billy!?


The rest of the film deals with the shockwaves and reprisals that stem from this opening double murder - it is an inticrate study in guilt, revenge and power, but with the plots speed set to 'absolutely minimum' and a thoughful creeping, invading sense of deep levels of cause and effect that govern the human psych...

'Star' of the film is Ryan 'Drive'  Gosling who plays Julian (Billy's younger brother) - he is a fascinating character even though he gets to utter only about 20 lines in the whole film. Head of the supremely disfunctional family is Crystal (Kristin Scott Thomas) who delivers a fantastic turn as the evil matriach who seems to draw pleasure in humiliating Julian.

Also of note is Julian's semi love interest Mai (Yayaying Rhatha Phongam) - who is a prostitute he visit regularly for indeterminable acts.

Much of Only God Forgives is actually a kind of surreal dream state which put me in mind of David Lynch's Twin Peaks - there are many scenes where you won't know if what you're seeing is actually happening or if it's all in Julian's mind... This intense use of symbolism and mystical subconscious probing will almost certainly alienate many viewers - but if you're up for some deep delving, thought provoking imagery - step this way as there is nothing else like this out there!!

A word of caution though, if you're in any way squeamish about swearing, sex, drugs or brutal violence, Only God Forgives isn't the film for you. This is one of the most harrowingly violent tales ever writ to the screen.

The avenging character of Chang - who weilds a mean short sword (which he seems able to pull as if by magic from his back) is an instant icon - is he an angel of death? 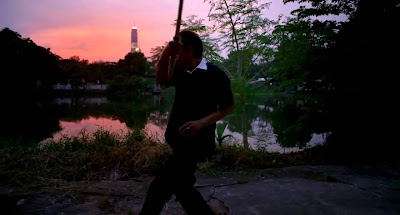 And as cinematic experiences go, Only God Forgives is so unique that it will sear into your mind and likely stay there for some time after...

"Think the dress might actually look better on Gosling!" 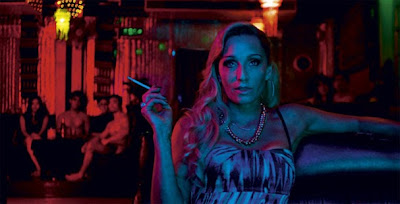 The awesome Tom Wade checked this film with me - his one line thoughts were as follows...

"Ryan Gosling stared directly into my soul... And then punched it till there was nothing left!"

Check out more of his thoughts on:  CULTURE SLAP
Posted by Matt Adcock at 4:53 pm