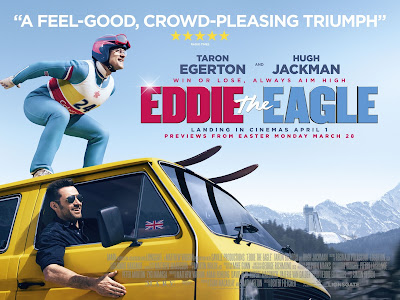 “I've been kicked off every team before I even got a chance to prove myself.”

Here we are then, a tale of courage, of death defying daring-do and erm, well, true British ‘heroic failure’. Inspired by true events, Eddie the Eagle (directed by Dexter ‘Wild Bill’ Fletcher) is a feel-good story about Michael “Eddie” Edwards (Taron ‘Kingsman’ Egerton), a lifelong loser who became an Olympic athlete. 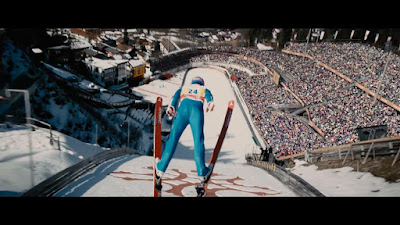 Despite the superb Marv production team that includes Matthew ‘Kick-Ass’ Vaughan, I didn’t have high hopes for this tribute to the unlikely but courageous British ski-jumper who never stopped believing in himself. I shouldn’t have doubted – Eddie The Eagle is an absolute blast of underdog-makes-good euphoria inducing fun.

I remember being a bit confused by Eddie’s ski jumping effort when I followed his infamously average progress live on TV back in 1988. It was a mixture of pride that we had a Brit stepping up to take on the frankly terrifying, incredibly dangerous sporting challenge, and of embarrassment that he simply wasn’t very good at it. This film strikes a great balance of showing the hard preparatory work (cue Rocky-esque training montage), the adrenalin pumping climax and yet doesn’t over glamorize the fact that Eddie still came last!?

Egerton is charismatic and does an excellent job bringing the geeky Eddie to life – showing immense range after his super cool Kingsman Agent turn last year and eating up the screen, making Eddie a very likeable British Champion. Also on hand to lend some A-list cred is Hugh Jackman who plays his reluctant coach Bronson Peary, and a strong cameo from Christopher Walken too.

The ski-jumping ‘action’ is superbly shot and pulse racing, plus the film scores major points for a cracking ‘80s soundtrack. There is a palpably sense of joy that flows through the movie and it’s hard to resist. Everyone looks like they’re having a good time - the supporting cast include stereotypical foreign ski-jumpers, a snooty British Olympic Committee and Eddie’s working class parents. 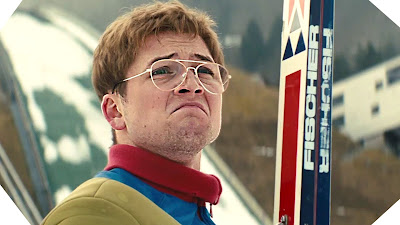 There are plenty of laughs to be had here too – and whilst Eddie is definitely a figure of fun, the vibe is more that we get to laugh along with him rather than just at Eddie’s seemingly overpowering hopelessness at sport.

Eddie The Eagle is a lovely movie worthy of seeing on the big screen!

Spiritual Enlightenment öööö - Dream it, do it