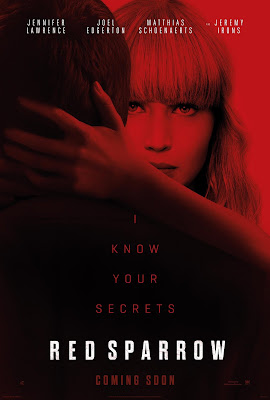 “Every human being is a puzzle of need. You must become the missing piece and they will tell you anything.”

Sex is a weapon in this brutal espionage-em-up which sees Jennifer Lawrence star as Dominika Egorova, a prima ballerina, who becomes coerced into a dangerous high-level intelligence operation.

Forced into an abrupt career change, Dominika becomes a ‘Sparrow’ a secret branch of the Russian intelligence network where the recruits were trained in a depersonalized type of manipulative sexual training to seduce targets and extract information.

What follows is a kind of slow burn cat-and-mouse game of intrigue as she stalks her prey - CIA agent Nate Nash (Joel Edgerton) - with a view to winning his trust and finding the name of the high level Russian mole he is in contact with.

As the two collide, things get muddled as Dominika employs her ‘special skills’ on Nate and in the charged atmosphere of trade-craft, deception, and forbidden passion the only question is who is playing who? 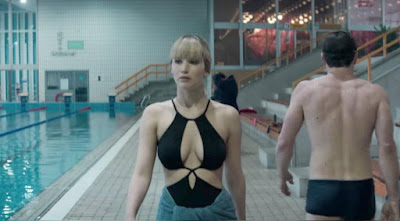 Director Francis Lawrence (no relation), reunites with Jennifer Lawrence after working together on several Hunger Games films and the reward is one of J-L’s bravest performances to date. Red Sparrow isn’t really an action film even though it covers similar ground to last year’s Atomic Blonde or the classic La Femme Nikita but it does feature some crunching violence and much sexualised nudity.

Charlotte Rampling and Jeremy Irons are on hand to offer some classy support on the Russian side and Douglas Hodge gives good sleaze as Dominika’s Budapest Bureau chief. Speaking of sleaze, Red Sparrow is not a feminist friendly film – whilst based on an actual and disturbing use of women to wield their bodies as tool for the Motherland, it does feel exploitative at times.

The plot is engaging in a nasty way but the film reaches for wannabe ‘epic’ status with an unnecessarily bloated running time of well over two hours. Red Sparrow pushes the limits for a 15 rating with very strong violence and torture as well as the sexual content. It certainly makes for uncomfortable watching at points and isn’t a feel good popcorn flick by any means.

So this Sparrow isn’t for everyone and won’t be remembered as a classic but it does effectively capture the paranoid feel of not being able to trust anyone and atmosphere of just how depressed life in Russia was. 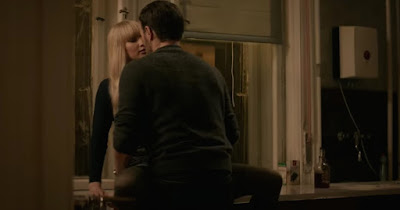 
Spiritual Enlightenment öö - Seduction should be for love