Kiss goodbye to your nerves, Hereditary is the new horror movie on the block that brings classy and truly unsettling viewing back with a bang. This might only be rated 15 but do not underestimate the sheer evil contained and the mind-bending freakery it unleashed. 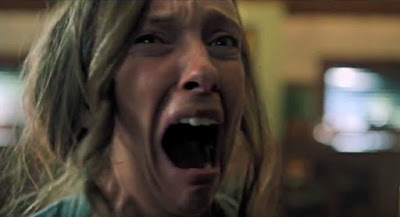 "Not a feel good experience"

This isn’t a film for the faint heart – decapitations, human sacrifice and horrific mutilations are weaved into a grieve laden tale of a dysfunctional family that is being torn apart by forces beyond their control.

By the time the end credits roll it’s likely you won’t even know quite how you actually feel about the film. It’s certainly really well made, the cinematography is gorgeous even when the subject matter is grim. What sets Hereditary apart from the quick jump standard horror efforts is the voodoo like creeping dread that it builds up. The scenery plays a part – in almost every shot there are things half seen, like the woods that surround the family home the shadows look sinister, the dark corners of the rooms hide possible specters. Even the strong gross out moments which are likely to burn into your mind are handled well.

As the plot get more grim, the subtlety starts to slip and so by the end we’re in full on Rosemary’s Baby 2.0 territory. Sure Hereditary references many other horror movies such as The Exorcist, Lake Mungo and The Last Exorcism but it does manage to carve out its own niche.

Everything is machine tooled to unnerve, even the architecture is purposefully ‘wrong’ – which reminded me somewhat of The Shining. There is a haunting score and an effectively upsetting use of sounds such as a once innocent clicking of the tongue. 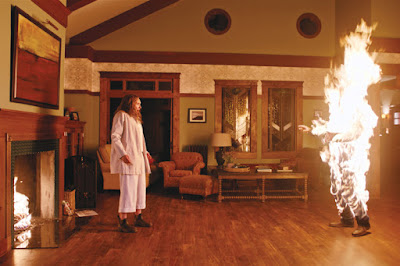 As a Christian I found the occult theology interesting in it’s anti-religious messaging, the plot of Hereditary fully encompasses spiritualism and doesn’t seem interested in providing a force of good to balance the scales.

Hereditary is a remarkable debut horror film from an obviously talented director but it might just be too disturbing for many.


Spiritual Enlightenment NONE - Negatives vibes only