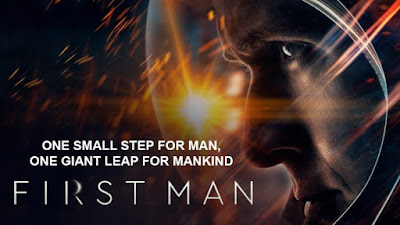 It’s slightly hard to believe that we managed to send men to the moon in the 1960s… With limited yet revolutionary tech, the space race between the USA and the USSR was at boiling point. After the determined Soviets had beaten the United States to nearly every new breakthrough, the US goes ‘all in’ on the first manned mission to the moon.

First Man is the tale of astronaut Neil Armstrong (Ryan ‘Drive’ Gosling) who history tells was the first to set foot on the lunar surface. His life and the challenges he faces are what director Damien ‘La La Land’ Chazelle shines a thoughtful and insightful light on. Gosling is on incredible form showing the man behind the spacesuit as he has to deal with tragic personal loss whilst going through the punishing and draining NASA training.

Back home his wife Janet (Claire ‘Girl in the Spider’s Web’ Foy) frets every time Armstrong has to take part in the training flights and exercises – and with good reason because several astronauts died in the preparations. Foy is a good foil to Gosling as their family dynamic is pushed to breaking point – both deliver excellent performances.

The brave (or unhinged depending on how you look at it) decision Armstrong made to agree to captain the mission moon landing attempt, knowing full well that he may well not come back alive will live in infamy.

From the nail-biting Top Gun adrenalin rush of the opening atmosphere busting altitude test flight through to the epic, inspiring and breath-taking climactic moon landing, First Man is an intelligent and thought-provoking film.

The cinematography is staggering too, mixing handheld intimate, shaky shots with jaw-dropping CGI and the fact it’s shot on lower resolution stock for a much more authentic, almost ‘archive’ feel. Unsurprisingly it’s the space scenes that burn themselves into your mind’s eye – giving the film a mesmerising quality.

The sound is an integral effective element too – hearing the rattle of the nuts and bolts of the quickly assembled craft popping and straining under the huge pressure of the space travel adds immensely to the tension.

First Man delivers deep human drama, along with staggering human achievement – this is a treat for the senses which deserves to the witnessed on the biggest screen you can find. Boldly go…

(4.5 - Spectacular and heartfelt drama that is literally out of this world)