Interview with Francesco Dimitri (Author of The Book of Hidden Things) 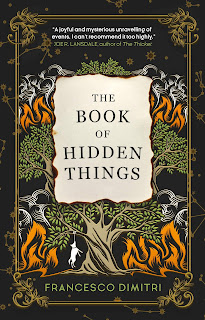 
There is a deep sense of wonder in The Book of Hidden Things. It is the compelling tale of what happens when four old school friends (who have a pact to meet up every year in the small town in Puglia they grew up in) try to discover what has happened when one of them disappeared.

Art, the charismatic leader of the group and creator of the pact, insists that the agreement must remain unshakable and enduring. But this year, he never shows up.

Is he caught up in something dangerous? There are rumours about Art - drug dealing and love stories but also bizarre and unbelievable rumours that he miraculously cured the local mafia boss’s daughter of terminal leukaemia.

In the chaos of his house, the friends find a document written by Art, the titular 'Book of Hidden Things', which promises to reveal dark secrets and wonders beyond anything previously known.

What follows is an incredible mystery where Francesco Dimitri (this is his first novel written in English, following his career as one of the most significant fantasy writers in Italy), will entrance, beguile and seduce you.

This is a book that will transport you to the gorgeous landscape of Southern Italy and make you reconsider friendship, magic, love and betrayal. I was blown away by this mystery which somehow exists somewhere outside of time itself but feels incredibly real...


1. Hi Francesco - loved your Book of Hidden Things, how would you describe it to those who haven't had the pleasure of reading it yet?

I am never fully at ease describing my books - in a sense, I already described them, by writing them.

I would say that, if you like to get a sense of place, a sense of mystery, and a sense of friendship, it might be for you.


2. What were your biggest influences for the novel?

They were probably musical rather than literary. If I had to single out one, it would be Vinicio Capossela, an Italian singer-songwriter who has been working a lot on Southern Italian lore.


3. The characters are very likeable - will we see any of them again in the future?

As a cameo, maybe, but no more than that. I don’t like sequels very much… I told a piece of their life. The rest of it is their business.

4. As well as books, Darkmatters is a film review site, could you give us your top five fav films?

My top five changes every day.

One of my all-time favourite is The Blues Brothers, and I love it because it shows that you can be wacky and warm at the same time...


5. We think The Book of Hidden Things would make a great TV series - what would be your Netflix pitch for it?

It’s not in my hands right now :) TV rights have been sold, so it’s a matter of crossing fingers, mostly.


6. What piece of advice would you give readers who might have experienced something they can't explain?

Don’t try to explain it. Live it. The value of some experiences is aesthetic rather than rational.


7. We're now reading your 'That Sense of Wonder' non-fiction book. If you had to pick one thing that invokes 'wonder' in you what would that be?

The sea - the Mediterranean, in particular. As a kid, I would spend hours just sitting on the beach, close to the sea, and doing nothing much, just being there, like with an old friend.
As a grown-up nothing has changed.


8. Finally what one thing would you want people to say about you in years to come?

That I didn’t completely waste their time x. 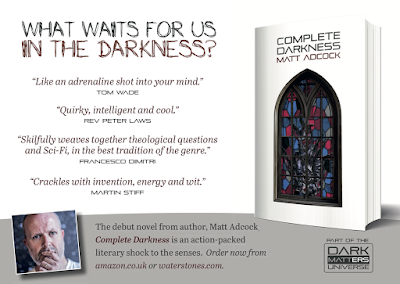 “Matt Adcock skilfully weaves together theological questions and SF,
in the best tradition of the genre”

Francesco Dimitri, author The Book of Hidden Things
Posted by Matt Adcock at 11:57 am