Matt lives in a time of DRAGONS (review) 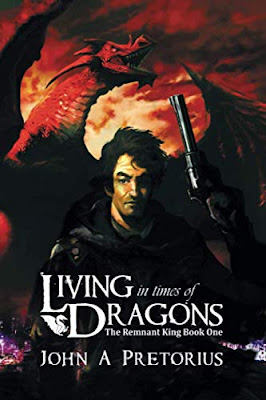 Living in Times of Dragons: The Remnant King Book One

“I don’t pray a lot for myself. You can say that’s my default setting. I don’t like admitting that I have no control and the events of the past months only underscore this. The idea, the Christian idea, that we have no control over anything has always scared me.”

Dragons eh? Next to magic might just be the most overused fantasy trope – with seemingly every author putting a dragon into their stories these days to channel the huge fan base these legendary creatures have. So when picking up Living in Times of Dragons I was expecting another standard dragon-em-up mixed with magic and set in an alt near future South Africa. What I got was a fascinating remix of the standard lore, some interesting characters and an injection of Christian faith into the tale too.

We get to join American ex-pat, father and widower, Roger Rommel – your average guy with issues, one thing is sure though – he didn’t believe in dragons. And so as Pretorius says in his blurb - unfortunately they did not return the sentiment.

Roger finds himself in South Africa after a self-imposed exile and runs headlong into a confrontation with dragons who it turns out are real and want to kill us!? Our ‘hero’ though has something up his metaphorical sleeve - a dream crafting ability which allows him some foresight into the future (although I don’t think he saw the dragon danger). Might he be the one person who can stop them?

Turns out the man vs dragon conflict has been raging for thousands of years old out of sight of most of us and Roger and his son are in serious danger. Who will survive and what will be left of them?

I’ve got to know John a bit on twitter over the last few months – both writing books at the intersection of the spiritual and fantastical gave us pause to check out each other’s tomes. I asked John about his thoughts on writing his, he told me:

“The inspiration for my book Living in Times of Dragons is not a linear line, but the basic kernel for it came when I was trying to find a story for private detective I thought up called Roger Rommel.

“The dubiously named Roger was created around the time I began to explore film noir and American detective fiction by the likes of Raymond Chandler, which happened after leaving school. It was also around this time where I first encountered CS Lewis (whom I never read as a child), GK Chesterton and the somewhat forgotten American author James Stoddard, all whom lit a fire in my imagination. Originally I wanted to use Roger for a noir novel with him as protagonist, but that went nowhere. I then began a second, more fantastic novel that I got further in, but which also went nowhere. On and off I tried stories with him and other characters, and those books never got off the ground

'there are all sorts of different dragons!'

“I ended up thinking about the character visiting an office of a rich prospective client, setting up your usual case of dames and blackmail. Roger would get distracted and look out the window, only to see a dragon flap its wings over the Pretoria skyline. After circling, the dragon went to attack them, singling out Roger. This scene does not even appear in the final book or any of its drafts, but it served as the seed for a series projected to be four books long, of which three are in a state of completion.

“Major literary influences are all over the map, but there are three major sources. I was definitely influenced by Lewis' more adult fiction like his Cosmic Trilogy and JRR Tolkien's Lord of the Rings, but it definitely drew its tone from two separate sources: Raymond Chandler's The Big Sleep, and Gene Wolfe's The Book of the New Sun cycle. Like in the latter, the book is written as a memoir of fantastic events, told at a definite time and place for the character, looking back on climactic events in their lives. Only difference is, Wolfe gives a definite ending for his character at the end of the first chapter. The Big Sleep, and Chandler on the whole, was a huge influence on the general tone Roger takes in narrating events..

“The biggest influence was probably GK Chesterton's The Man who was Thursday. Despite being written in the early 1900s, it feels like what you'd get if the Monty Python gang tried to write a Christian allegory in the form of a James Bond parody. A mindscrew of epic proportions, it has many thematic overlay with the Remnant King saga, and also has a character named Doctor Bull for good measure. Although it keeps its meaning oblique, a study of the text indicates that the novel was written out a frame of mind of depression, of someone trying to make sense of a chaotic world.

“Finally, two other influences that are not very apparent, is the Bible, particularly the Book of Job and the Book of Jonah, as Roger is something of an amalgamation of the two, just cast as a detective.”

Living in Times of Dragons does a lot of world-building as it is the first in a planned franchise. I found that at points the dialogue gets very detailed in places which might put off those who enjoy a faster-paced romp. But it weaves an interesting tale and is hopefully the start of series that will ratchet up in pace as it goes on.

Pretorius writes with an interesting style and the book has some great flourishes including a map, some visuals and font play which I’m a fan of so grab the paperback if you have chance. Overall if you’re looking for a modern dragon fantasy – this is a solid addition to the genre that brings enough new thinking to the party to be worth taking a look.

(4 - Dragons can still be relevant in this remnant)
Click the banner below to check out some dark sci-fi...