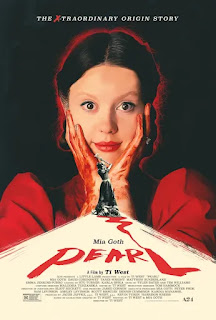 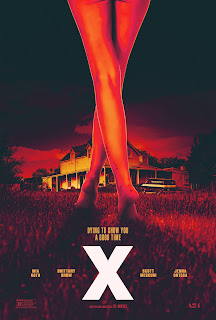 “I want you to remember what it feels like. Because that’s how I felt every time you looked at me.” Pearl

“I will not accept a life I do not deserve." X

Ti West is racking up an impressive list of scary movies, personal favs include The Inn Keepers and The House of the Devil. But even his lesser works like Trigger Men, The Sacrament, and Cabin Fever 2: Spring Fever are worth a look…

This year he’s back with a fiendishly ghoulish, outrageously fun shocker Pearl – which is a prequel to his grizzly X.

X was a kind of homage to 70’s Texas-Chainsaw-esque horror based around an adult film ‘The Farmer's Daughters’ production. Both films share the same location – a quaint farmhouse, home to Pearl (and her family in Pearl, and her husband in X). 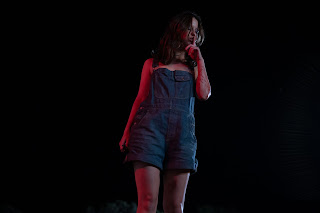 Mia Goth stars as the titular Pearl in both films, but where in X she put a whole new level of fear into grandmas, here she’s a young Judy Garland-alike old-fashioned, picture show wannabe dancer who dreams of getting out and making it big on the stage.

Has she got the “X Factor,” though? If you’ve seen X then you’ll know that she ends up back at the farmhouse but it’s a lot of fun finding out if she ever escaped… Pearl itself is terrifically accomplished and horribly gripping, as the Guardian review said it brings a “golden-age movie pastiche and dashes of Psycho and The Wizard of Oz” which is a great description.

In my opinion, both are great in their own way and together make for a knockout 1,2, combo… Here’s hoping that Maxxxine will smash it as the trilogy ender!!

>>> Imagine a world where the earth is becoming hell?

Click below to find out in my dark sci-fi novel...