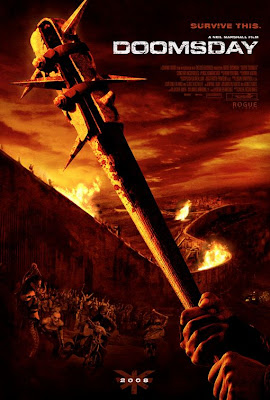 What do you get if you cross Mad Max, Escape From New York, Aliens, 28 Days Later and maybe throw in a bit of Excalibur for fun? – In a word ‘Doomsday’.

You hear that shrieking noise though? That’s the sound of a director’s cool imagination and creative flair grinding up against the limitations of his big scale storytelling plotting ability… After serving up five star horror hits with Dog Soldiers and The Descent Neil Marshall wobbles a little with his third feature, but even Marshall on a slightly off day is still an absolute blast of guns, babes, car chases and deranged Scottish cannibals…
Seems that after a savage new virus called ‘The Reaper’ has wiped out most of the Irn Bru drinking types north of the border – those left split into two factions. The first are post apocalyptic punks a la Wild Boys or Mad Max, just hyped up a bit more due to having can of Tennants Lager to hand… Think hundreds of clones of Trainspotting’s Begbie – dressed in leather and sporting punk hairdos - brandishing all sorts of nutty weaponry, actually it was kind of like the crowds at tonight’s UEFA Cup Final!?

There are some very tasty scenes, like the initial Metal Gear alike assault on a baddie packed tanker which gets props for ‘best use of a detachable eyeball camera’ I’ve ever seen.

So cut to interior of a ravaged Scottish castle – a crazed scientist dressed as a medieval lord is ranting: “These walls around you; they were built to last, and so shall we. What we've built here, from the ashes, is pure blood. Uninfected by the outside world... until now. Ah, even now you still cling to hope, huh? If I were you, I'd abandon any such thought. There is no cure. There never was. We have prevailed here, not because of science but through natural selection. Survival of the fittest. We have earned the right to live…”

This is the kind of unexpected left field scene that works so well because this bunch of survivors have gone back to living as medieval types, complete with armour, torture devices and stuff.

Rhona ‘Soon to be in Underworld 3’ Mitra is the plucky heroine ‘Eden’ who kicks copious amount of ass and looks good whilst doing it. She gets some great lines, delivers some wicked pain on the Scots and gets to drive a superb Bentley in a frantic car chase.

There’s plenty of decapitation, mutilation and serious dismemberment – which earns the 18 rating with aplomb. It all looks good and the scenes that pay heartfelt homage to the films listed at the start of this review – so if you have any love for those then you’ll enjoy Doomsday to some extent.

Am really hoping Marshall can get his groove back for next year’s Drive which sees a Hollywood stunt performer (Hugh Jackman) moonlighting as a wheelman – who discovers that a contract has been put on him… Sounds promising!! 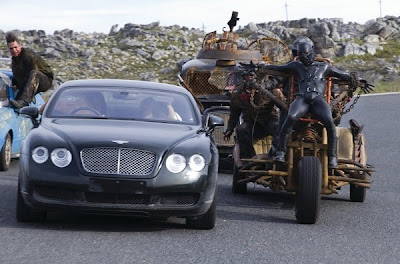 "the new Bentley 'gimp' advert went down a storm"

Endorphin Stimulation: öööööö (6)
- Disengaging you brain before viewing will help

Arbitrary final rating: öööööö (7)
- A near miss which is worth checking if you like apocalyptic action

Liable to make you:
"book a holiday in Scotland and pack lots of Tennants lager"

DM Poster Quote:
“They can take our freedom but they can never take our, oh, erm…" 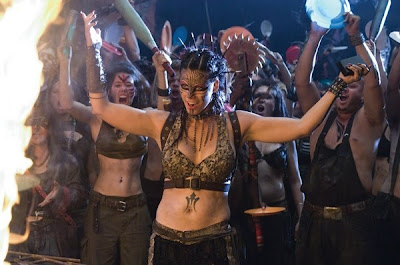 "Scotish lassies know how to give a warm welcome!"

So is it worth my time tomorrow evening considering nothing else worth seeing is out?!