Mushishi - The 'what's bugging you' review 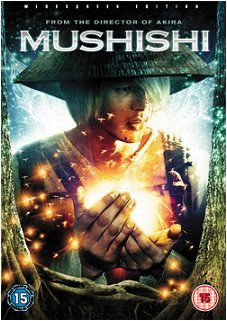 Some films are so weird that they almost defy classification – Mushishi absolutely falls into this category. Imagine a world where ‘Bugs’ (kind of spirits or sprites) exist in and around us. The bugs can take many forms – rainbows, words, willo-the-wisp types ephemeral creatures, smoke, light and darkness to name but a few.
Mushishi tells the unbelievably odd tale of a boy named Yoki who loses his mother and falls in with a strange ‘Bug Master’ woman named Nui – only for her to get swallowed by an enchanted lake and transform into a bug state herself. Nui condemns herself to live a bug-invested half life, existing both as a blind woman and fish made of light (if you’ve played ‘fl0w’ on the PS3 you’ll have some idea of her luminous fish form). Anyway, the boy barely survives but loses all his memories, changing his name to Ginko (the name of the eyeless fish spirit of the enchanted lake) – as you do…
The plot jumps back and forward in time between Ginko’s adventures as a Bug Master and the boy’s back-story. Weird and wonderful characters populate this magical tale including a girl who grows horns due to her bug infestation, another girl (and possible love interest fpr Ginko) who inherited the ability to transform bugs into writing and keeps endless journals detailing the various types of bugs that exist.
Of course there is a baddie in the terrible form of Takayomi (the darkness bug) and the slow, ponderous story builds up to a climactic showdown for Ginko to face off against this all powerful bug form.
Along the way you’ll see some incredible sights, the mix of live action / CGI that depicts the bugs is genuinely unnerving and there are some stunning vistas. The Japanese locations are gorgeous and the cinematography just wonderful… But despite all of the positives, I was left bemused by the film overall, perhaps this is a cultural jump too far for Western mindsets? Despite the ending taking me by surprise and a lingering sense of ‘WTF?’ I was strangely moved by this oriental oddity.
If venturing into the world of Mushishi – don’t go expecting action or Manga style battling of any kind, get ready instead for your mind to be stretched, your eyes to be feasted and your mind to be befuddled… It’s a trip worth taking but only for the prepared…

Tasty Action: ööööö (5)
- This isn’t an action movie but there are a couple of fights

Gratuitous Babeness: ööö (3)
- Not really – unless you’ve a thing for horns on the forehead?

Mind Blight / Boredom: öööööö (6)
- Those hoping for Akira like big bangs will be disappointed

Arbitrary final rating: öööööö (7)
- Strange and haunting, gets better as you think about afterwards

Liable to make you:
"take up bug hunting"

DM Poster Quote:
“There are things out there that we don’t understand…" 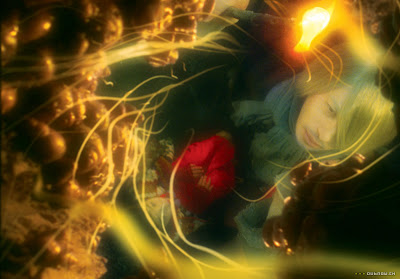