Speed Racer - the 'fast enough to blow your pants off' review 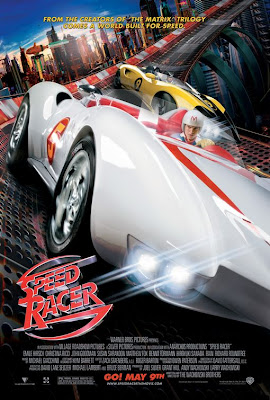 ‘Gentlemen, start your engines…’ I’m not trying to dismiss the multitude of talented and roadworthy women drivers out there (hi to both of you) but because Speed Racer seems to appeal mostly to those of a male stereotype. My evidence for this is backed up by the fact that there was not a single female in the screening I saw this in…

Speed Racer is the new flick from the Wachowski brothers – they of The Matrix fame – it is basically a two hour sensory overload of high octane, primary coloured loony-tunes racing action.
You probably won’t see a more dazzling, head frying, supersonic cinematic experience this year – my two sons were mesmerised by the big spectacle races, kid friendly and comically violent ninja assaults and general mischief cooked up by the ‘Racer’ family. Speed Racer has a completely unique visual look; kind of live action Japanese anime mixed with that Wacky Racers cartoon from way back and played out like a High Definition PlayStation game forced through a particle accelerator.

The plot follows Speed Racer (Emile Hirsch) on the verge of becoming the greatest racing driver the world has known, as if he had a choice with a name like that? But he is living in the shadow of his older brother Rex Racer (Scott Porter), who was the previous best until tragically dying in a race. Speed comes to the attention corrupt big business Royalton Industries' whose slimy CEO (Roger Allam) is part of an international race fixing syndicate. So will the young ace choose to sell out to the money men or will he stick with his family racing team owned by his Pops (John Goodman) and become ‘the one’ to end the tyranny of the big boys? Hhmmmm…

Speed Racer might not be a great movie overall, but in parts it offers a glimpse of wild racing action that is beyond fantastic. If my sons are any barometer of the effect seeing this will have on young lads the world over – they are likely to crash their bikes on the way home while trying to hit the speeds achieved by the Mach 5 car Speed drives. (He’s okay by the way, just scraped knees and elbows). Still, big screen viewing is certainly recommended; this is the kind of spectacle that could only have been dreamt up from the minds who reinvented the modern sci-fi action movie.

Endorphin Stimulation: ööööö (6)
- Eyeballs will be out on stalks but you won't have too much to think about

Tasty Action: öööööööö (8)
- The races are awesome plus some poo gets thrown in the baddie's face!?

Mind Blight / Boredom: öööööö (6)
- Some might have issues with the flimsy plotting

Arbitrary final rating: öööööö (7)
- If you don't like cars take 3 stars off this rating

Liable to make you:
"crash you bike on the way home trying to go Mach 5 - oh I already said that" 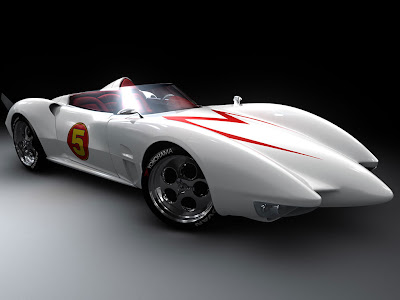 its so depressing to see speed racer crash and burn like that..i really expected it to kick iron man off the charts..check out this crazy stand up comedy clip i found about crappy cars..wonder if speed would look just as hot riding one of these..funniest thing ive seen in months
http://effinfunny.com/jackie-kashian/piece-o-sh%2At-car
enjoy:)

Shouldn't it be the Watchowski 'family' now?!