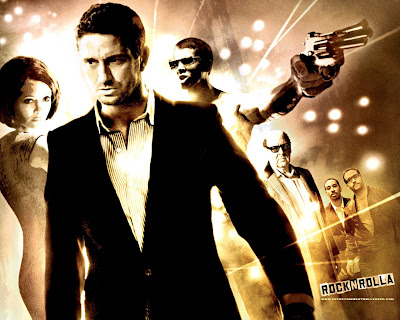 
A ‘RocknRolla’ can be defined as a someone who wants it all – the good life, the money, the girls, the power… It’s the rock and roll lifestyle turned up to the max. So who better is there to bring the compulsive dodgy world of a RocknRolla to the big screen than Guy ‘Lock, Stock and Two Smoking Barrels’ Ritchie?

After the slight misstep of ‘Revolver’ and the chronic failure of ‘Swept Away’ starring his famous Mrs, Ritchie blasts back to the big time with this overload of sex, thugs and rock ‘n roll. RocknRolla is a tall tale of high crime set in modern day London, populated with a sparkling assortment of low lifes. Gerald ‘300’ Butler stars as One Two, a likable but shady fella who wants to tap into the London property market. He gets caught up in a dangerously tangled web of corrupt politicians (an excellent Jimi Mistry), Russian billionaires (Karel ‘Hellboy’ Roden) and old school London Crime Bosses (Tom Wilkinson). It seems that there’s some easy money for One Two and his mates to liberate from the Russian, thanks to the tip off from the double-crossing gorgeous financier Stella played by Thandie Newton. But taking seven millions euros is likely to attract serious attention from a host of wrong-uns and the stakes escalate to the point where nobody is safe. The wild card in the mix is the RocknRolla of the title named Johnny Quid (Toby ‘Wilderness’ Kebbell), presumed dead, but very much alive – Johnny takes a fancy to his mob boss father’s painting, looking to support his drug habit. Only it’s not his dad’s painting, it’s on loan from the Russian billionaire, who is keen to get his ‘lucky’ painting back.

Everything zips along with lightening pace and a supremely stylish visual look that is achingly hip. The dangerous London underworld has probably never looked so good and anyone who enjoyed the dodgy dealings of Snatch or Layer Cake is in for an absolute treat. RocknRolla is potentially the coolest film of the year, the cast are excellent, the script sparkles with humour and is packed with twists and memorable scenes. This is a culture clash of seismic proportions exploring what happens when the hungry new criminal element from the East come face to face with the entrenched London mob. Excitingly for action crime flick fans, the end credits even promise a sequel… Nice one!! 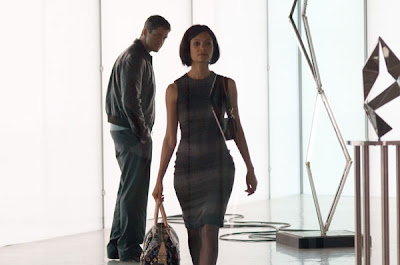 "Newton plays it cool, but then just about everyone does in RockNRolla!"

Endorphin Stimulation: ööööööö (7)
+ It's not new, but it is cool

Gratuitous Babeness: ööööööö (7)
+ Newton is a foxy minx for sure

Mind Blight / Boredom: öööö (4)
+ Nothing here to make you snooze

Comedic Value: öööööööö (8)
+ Tons of crackling comic one liners - Ritchie is on form

Liable to make you:
"want to be a RockNRolla"

DM Poster Quote:
“The next generation of mobster has arrived"