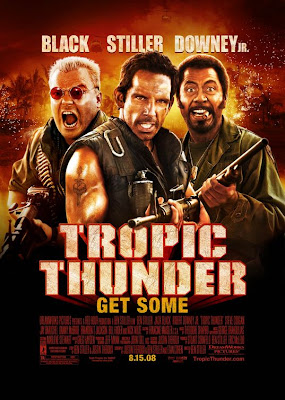 You here that noise? That’s the sound of thunder and it’s coming from your local cinema… Tropic Thunder has hit the UK and it’s going to get messy. Get ready to go down in a hail of hilarious, offensive, quick-fire war movie spoof gunfire. The thunder you’ll experience if you take this tour of duty is that of deep belly laughter.
You’ll marvel at washed up action hero Tugg Speedman (Ben Stiller), a man desperate to re-ignite his box office potential after a string of weak sequels to his one major hit ‘Scorcher.’ Cringe at fat-suit specialist / comedy star Jeff Portnoy (Jack Black) who’s fighting a losing battle against drug addiction and wants to be known for more than just fart jokes. And freak out at the ultimate heavy-duty method actor Kirk Lazarus (Robert Downey Junior) who doesn’t come out of character until he’s finished the DVD commentary track. Finally there’s Alpa Chino (Brandon T Jackson) who’s character is the face of ‘Booty Sweat’ soft drink, and a handy foil to Downey Junior who’s blacking up to play the lead black character walks a knife edge of racism.

This rag tag bunch of actors and their massive egos are inadvertently thrown into a real guerrilla war situation by bumbling Brit director Damian Cockburn (Steve Coogan). Things go pretty insane after that as the actors have to fight for their lives as well as their film careers.
There are big laughs on offer here, starting right from the off with some sublime mock trailers for each of the main character’s previous films. The audience I caught this with were in universal hysterics more than once thanks to some quality rib tickling moments.

Tropic Thunder chronicles the filming of a big budget Vietnam action epic, which gets a month behind schedule five days into the shoot thanks to the actors swanking about like Prima Donnas throwing tantrums at every turn. Faced with having the plug pulled by the studio, Cockburn helicopters his leading men deep into the jungle and the heart of darkness that awaits them.

The crown jewel here and final killer reason that Tropic Thunder is potentially the best comedy of 2008 is a welcome career comic turn from Tom Cruise as the evil studio head Les Grossman. Cruise has never been funnier (even when freaking out on Opera in real life) and Grossman is a character of potential comedy legend… 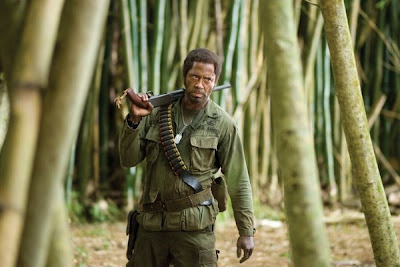 DARKMATTERS RATING SYSTEM
(all ratings out of maximum 10 but '-' is bad whereas '+' is good):

+ Fun and over the top action scenes add to the spectacle


Comedic Value: ööööööööö (9)
+ Doesn't get much funnier than this - Tom Cruise is excellent!!

Arbitrary final rating: ööööööööö (9)
Bring the noise - this is a tropical storm of laughter

Liable to make you:
"get some"

DM Poster Quote:
“see the dude playin' the dude, disguised as another dude!"
Posted by Matt Adcock at 11:09 am

Email ThisBlogThis!Share to TwitterShare to FacebookShare to Pinterest
Labels: ben stiller, funny, get some, tropic thunder

The movie is hilarious as well as entertaining. Jack Black's character can be an inspiration to those who want to change for the better.

The best part about this movie is the massive amount of comedic talent assembled and how well they all seem to go together.