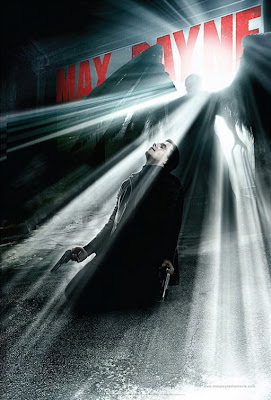 Video game to big screen adaptations are invariably hit or miss affairs, critics tend to hate them, fans of the game get upset if plot details are changed and even the actors rarely seem to ‘get’ the character they are playing… Having been an avid gamer since the days of Pong and ZX Spectrum, and having played and enjoyed both Max Payne (on PS2) and the follow up (on PC) I was really hoping that the filmmakers and Mark Wahlberg would do Max justice.

The Max Payne games were multiformat cult classic run and gun mysteries that implemented an impressive ‘bullet-time’ slow down (as opposed to frame rate drop) which was completely borrowed from The Matrix but worked so well that it never failed to put a massive grin on my face when I’d kick open a door, and shotgun blast each of the adversaries before they’d even had time to draw their weapons. Oh and there was a dose of Norse mythology fused into the noir detective storyline that made it much more interesting than a simple shoot-em-up.

Twentieth Century Fox picked John Moore (who already has a debt to Satan for making The Omen ’06 so average) to direct the film; he’s a guy who adheres to the ‘style over substance’ school of film making and that is how he tackles Max Payne. The hard-boiled noir look of the film is a stunning achievement – hypnotic hyper-stylised snow swirls in a constant poetic backdrop, the city is a wonderful bleak metropolis a la Sin City and Wahlberg’s constipated frown is a dead ringer for the videogame Payne. Production values are high across the board and even the slightly wacky hallucinogenic visions of Norse Valkyrie demons are rendered effectively. Then there are the babes, sultry but bad ass assassin Mona Sax (Mila Kunis), and a sizzling cameo by new Bond girl Olga Kurylenko who wears a mean red dress (and seems to have a thing for videogame movies as she was in Hitman last year). So far, so good…

But there’s always a downside and here it’s the plot which brings the payne (sorry). The movie is a mish mash mostly ripped straigh from the game and then padded out, remixed and jubbled togther without much care for consistency or dramatic endeavor. We find Max struggling with his guilt and rage over the death of his wife and child at the hands of drug addicted scumbags. Three years he’s been hunting the killer and now an outbreak of grissly murders looks to be linked to his family’s deaths. The join the dots linkages between scenes are liable to insult even the most retarded of teen gamers but at least there’s the tasty gun action right? Sure, there is some and when it eventually kicks off it looks very good – even working in some effective bullet-time moments, but it feels slightly muted and overly sanitised which goes against everything the original games stood for. I can see that the studio wants to make this available to as wider audience as possible (in the US it got a PG13 rating) but when trying to stand alongside similar ‘feel’ movies such as Sin City or The Crow, Payne wimps out. Maybe if the audience had been dosed up with the film’s experimental performance enhancing drug called Valkyr – they might have gotten into it more?

The cast are average at best, Beau Bridges hams up his role of Payne’s former partner like his family will be killed if he in any way manages to look convincing, Chris “Ludacris” Bridges shows that he should stick to rapping as he sleepwalks around looking confused and Chris O’Donnell, Donal Logue, and even Nelly Furtado round off the oddball assmebled ‘talent’.
You know you’re in trouble when two nameless junkies get some of the best lines e.g.:

Junkie 1: Hey man, see that dude with the watch? Are you thinking what I'm thinking?
Junkie 2: He could tell us what time it is?
Junkie 1: No you idiot! We could steal the watch, sell it, and get more drugs!
Junkie 2: That's a brilliant plan! I have a gun!
Junkie 3: Man, what if he has a gun too?
Junkie 1: You idiot, law-abiding citizens aren't allowed to have guns here! How do you think we'd survive if they did?
Junkie 2: Let's go f**k this guy up!

Screenwriter Beau Thorne doesn’t seem to know quite how to bring all elements together effectively, so he sacrifices coherence *cough side kick just happens to turn up and save Payne’s ass twenty stories up in a secure corporate tower? Huh? *cough and hopes that nobody is paying enough attention to notice. 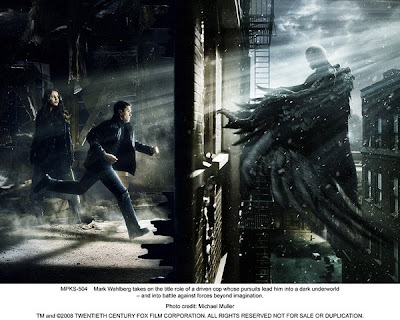 Yes the Max Payne movie is slick and good looking, and is so nearly a great blast of crime mystery peppered with some decent fights but it trips itself up and in the end probably won’t please enough people to warrant a sequel. If you do find yourself buying into this, there’s a tease for a possible follow up after the end credits (but even this is in not in the same league as Iron Man’s Nick Fury post credit introduction).

My biggest problem with the fim version when compared to the game though is that for a climactic showdown, the ‘end boss’ is simply no challenge, whereas anyone who has played the game will attest otherwise!? The usual action movie double standards are writ large when Payne can take a point blank clip of semi-automatic machine gun to the chest whereas the enemy falls to an unsatisfying single round.

If you’re prepared to let a fairly dull plot wash over you whilst you enjoy the visual stylings and occasional flash of action then step right up, otherwise Payne is simply going to be another ‘failed’ videogame adaptation. Perhaps a PS3 Max Payne 3 might redress the balance because it would be a shame for the film to have taken Max to a watery grave…
DARKMATTERS RATING SYSTEM (all ratings out of maximum 10 but '-' is bad whereas '+' is good):
Endorphin Stimulation: öööööö (6)
+ Norse mythos helps a bit
Tasty Action: öööööö (6)
+ The action is cool but very sparse!
Gratuitous Babeness: öööööööö (8)
+ Mona Sax and Olga Kurylenko are suitably hot
Mind Blight / Boredom: öööööö (6)
- Why so slow and ponderous?? WHY???
Comedic Value: ööööö (5)
- limited wise cracking
Arbitrary final rating: öööööö (6)
I'm a sucker for cool stylish noir films but Payne only just passes muster

Liable to make you:
"get a Norse tattoo or go back and play the games again"
DM Poster Quote:
“Bring the Payne!?"
Posted by Matt Adcock at 8:58 pm

I really like going through webs like this. Very informative and an interesting features but one thing i want to say that you are the best maker of web in world