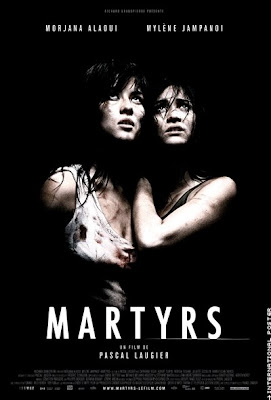 Reviewed by Matt Adcock (at home with the lights down low)

Some things are simply too awful, too shocking and too disturbing for general consumption… Viewing experiences deemed ‘dangerous’ that are just too extreme for the mainstream, for the ‘decent’ Daily Mail reading Middle England or for those who don’t have the capacity to withstand an assault on the senses that engages on a deeper lever than dim ‘video nasty’ Friday night thrills.
There are few films that warrant such caution – but Martyrs is one - read on only if you are curious to hear a report back from the darkest, wildest side of cinematic experience.

Martyrs is quite possibly the nastiest, most seriously horrifying film you’ll ever witness.

When a little girl is found wandering by the side of the road, her wasted body showing signs of severe neglect, starvation and torture she claims not to remember what happened to her whilst kidnapped and held prisoner for over a year.
But young Lucie is a survivor and during her following years in an orphanage she survives by employing both violent antisocial behavior but is also terrified by haunting and deeply disturbing paranoid delusions. Despite this she forms a friendship with another girl named Anna, who supports her – together they form a suitably unstable alliance.

Some years later, the two girls (now in their 20’s) turn up unannounced at a family home and proceed to graphically slaughter the entire family. Lucie is convinced that this seemingly normal suburban people are the monsters who took her prisoner and only a dose from the business end of a double barrel shotgun will see justice restored. 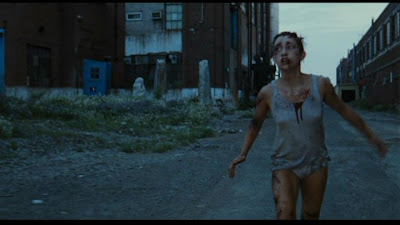 "things don't start well and only get worse from here..."

So far, so grim but still just a standard revenge horror thriller… These events however are only the prologue – the starter of a three course banquet of mind bending blunt force trauma that starts from grissly cold-blooded murder and accelerates into twisted sadistic nightmare territory beyond the bounds of taste and decency. I won’t go into the plot anymore as its better that it takes you unawares – everything is well shot and if Laugier does get his rumoured shot at remaking Hellraiser – it could turn out to the best horror film ever!?

But despite the abject gruesomeness perpetrated on screen here, this isn’t a simple shock-em-up like Hostel or Cabin Fever, Martyrs outpaces even the recent nou-wave of Euro horrors such as Haute Tension, Satan, Frontiers or Calvaire. At the sickened heart of this tale is a treatise about martyrdom, not a celebration of voyeuristic suffering but a descent through excruciation to a place of zen-like rapture. “Martyr” is apparently derived from the Greek word for ‘witness’… witnessing this absolutely isn’t for many though… If you read this blog much you’ll know that I’m not easily shocked but I found parts of this merciless escalation of torment almost physically painful to watch. Credit is due to the cast – Anna (Morjana Alaoui) is gorgeous even whilst undergoing all sorts of beyond the pail nightmare situations.

This is a tour-de-force that grips like a vice of vicious endorphin enlaced spikes – you won’t know where to look, you’ll be challenged and freaked out but you won’t forget it (ever)…

Not convinced? check out this review of the film over at The Horror Club which says:

“Pascal Laugier did something bold and daring, and pulled it off extremely well. Some will truly love this film, some will absolutely downright hate it, and others will not know what the hell just happened to them... whichever way you feel though, it's a movie that deserves to be seen.”
Posted by Matt Adcock at 12:49 pm

Martyrs is an interesting film, disturbing and thought provoking. As a horror movie, it has done its job--which may be the most one should ask of a horror movie. After all, what is the purpose of the horror genre? To be shocked, startled, reviled, disgusted in the safety of one's family room or the local theater. Entertainment.

However, it is odd to me how some people seem to find "greatness" in Martyrs. This is not a great film. I do like the acting, the camera work and editing are technically competent, the sound and music good--which quite a few horror films lack! Martyrs is a well-crafted movie in the Hollywood style. (It IS made in the Hollywood style--Media Studies majors get over it...) But, the grand epiphany that supposedly comes through intense and prolonged physical pain as seen in the photographs of other tortured people throughout history, although intriguing, is not supported well enough in the script to overcome my willing suspension of disbelief. The cellar hallway scene, of course, with the Cult's leader explaining to the main character the need for torture with the photo album (despite the fact that the same larger photos are on the wall next to the actors) is almost comical in its brevity. The film would have been creepier had it delved into the occult and the mysterious efforts of alchemists...or, say, if the secret organization were financed by the Vatican. We're not told, and I think to the film's detriment. How can martyrdom be talked about without religion. On the other hand, how can torture be rationalized without some self-serving (most would coin this kind of enterprise as evil) intent? Of course, anyone thinking that the male torturer and the others are just "doing their jobs" would probably find "the whole Nazi thing" to be no big deal....

No. What horrifies me about this kind of film is that it glorifies a false intellectualism that treats graphic torture in a relative light. I'm not as worried about "American Rednecks" loving this film as much as the mildly educated 20-somethings who think that they have stumbled upon something deep in this "wicked Euro-flick"--which they'll probably buy and place next to their TOOL CDs....

This was one of the most absurd and dull horror films I've seen in a long time. Removing an entire layer of skin to see "the other side"? No, that's just a way to show off some gooey special f/x. Boo!