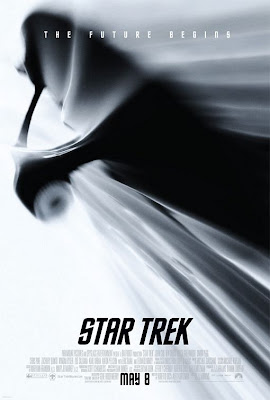 Whilst watching JJ ‘Lost’ Abrams’ reinvigoration of Star Trek, I felt a great disturbance in the Force… That’s because for me good sci-fi beginning with ‘Star’ should end in ‘Wars’ not ‘Trek’, so I’ve never had much time for the intergalactic Trekking of Kirk et al but I approached this with an open mind after having been impressed by the trailer. Two hours later my expectations had been set to ‘stunned’… This is Trek Jim, but not as we know it – we’re talking crowd pleasing action packed blockbuster of the highest order. It’s highly accessible; you won’t need a degree in Klingon or even require a working knowledge of the TV series (although there are lots of fan pleasing nods to the originals). 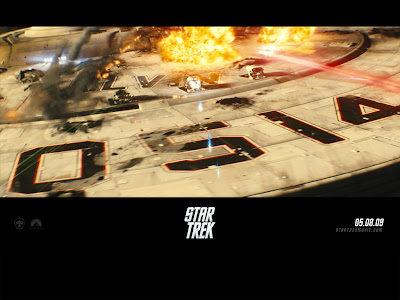 Abrams’ new Star Trek details the early years of one day legendary Captain James T Kirk (an engaging Chris Pine who has come a long way from tat like The Princess Diary 2). It turns out that Kirk was a rebel even as a youngster, his maverick credentials underlined by a great scene of him burning along in a stolen classic car to the thumping soundtrack of Beastie Boys’ Sabotage. Also on hand is the pointy eared Vulcan Spock (Zachary ‘Sylar from Heroes’ Quinto) who begins his long term friendship with Kirk by making his life hell.
The young cast are uniformly watchable, Zoe Saldana is a sizzling Uhura, Anton Yelchin’s Chekhov is genuinely funny, and Simon Pegg‘s Scotty is pure genius. Karl Urban's Dr ‘Bones’ McCoy walks a fine line of parody but the original Spock, Leonard Nimoy turns up and forms a great link between all that has gone before with an excellent extended cameo.

You can almost feel the tangible fun that the filmmakers had reinvigorating this franchise which had dropped to an all time low with the last film Star Trek X: Nemesis. Fist-fights, shoot-outs, daring do and even an obligatory green skinned alien temptress make this light speed ahead of the stodgy Star Wars prequels. Abrams has kept all the best stuff from before - warp drives, phasers, teleporting and even the classic Enterprise spaceship design, so fans of the original have little to complain about. This is quality that can stand toe-to-toe with the likes of the superb and much lauded recent Battlestar Galactica TV remake.
So if you only watch one sci-fi space epic this year, you should have no fear in boldly going where no ‘Trekkie’ has gone before… To mix metaphors, ‘The force is strong in this one.’
Arbitrary Darkmatters final rating of: ööööööööö (9 - ENGAGE, Make It So etc...)
Darkmatters quick reference guide:
Action 8
Style 8
Babes 6
Comedy 7
Spiritual Enlightenment 8
Not convinced? check out this review of the film over at Black Sheep Reviews
- best line:" Suffice it to say, it is intricate and tight and a lot more fun not to know where anything is going at any point in time. It is such a smooth ride that you can just sit back and enjoy the comfortable warp cruising speed."
Posted by Matt Adcock at 10:19 pm