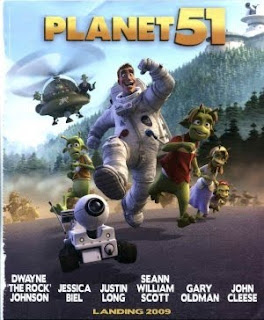 Space, the final frontier… We humans have long suspected that there might be life out there in the cosmos but nobody could have suspected quite what would happen when we ‘make contact’ for the first time.

"look into my eyes are say 'arrgghhhh!'

Prepare to blast off into a new galaxy of fun with the pleasing family friendly CGI comedy adventure Planet 51. The writers of Shrek have gone to town bringing a loving homage to just about every major science fiction film you can name – complete with de rigueur '50s Americana. The twist here is that it is the aliens who are the ones living out their normal lives when all American Earthling, Charles T. Baker (Dwayne ‘The Rock’
Johnson), crash lands in the middle of their cosy suburbia.

Through chance Baker lands in the garden of average alien teenage Lem (Justin Long) who has his mind on nothing more than trying to get the girl of his dreams Neera (Jessica Biel). Rather than turning our lost astronaut hero over to the xenophobic authorities led by baddie General Crawl (Gary Oldman), Lem becomes an unwitting partner in helping Baker get back to his spaceship and return to earth. Cue danger, fun misadventure and lots of laughs as the dynamic duo work through scenes from classics such as E.T. only with the roles reversed. Planet 51 cracks along at a good rate of knots, my son picked this for his birthday movie and he and his pals laughed loud and long. The biggest reaction came to the gently ‘risqué’ line when the aliens accidentally see Baker naked and quip “That’s a strange place to have an antennae!”

The animation and effects from this new Ilion Animation Studios are excellent – almost up to what we’ve come to expect from the leading teams at Dreamworks and Pixar. There is a funky soundtrack which really brings the aliens stuck in the ‘50s setting to life and lots of referencing of genre classics – look out for my favourite which is the little dogs that wee acid… much like a certain famous much less friendly alien.

I’d actually pay to see a spin off from this starring Baker’s K9 alike (and blatant WALL-E rip off)  ‘Rover’ who steals every scene he’s in. Throw mad scientist Professor Kipple (a fun turn from John Cleese) who has a penchant for extracting brains and you’re in for a good time whatever age or species you are.


Click here to check out the PS3 game of Planet 51 reviewed at the excellent PSAttitude - seems you might be better off sticking with Little Big Planet!?

Darkmatters final rating / out of 10: ööööööö (7 – right stuff, wrong planet, worth a watch)

Action 7 (cracks along in a pleasing slapstick way)

Style 7 (nice animated style, can compete with the big boys)