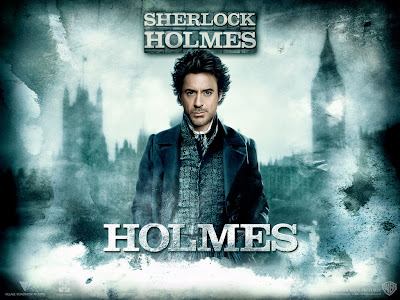 The names Holmes, Sherlock Holmes… The big screen takes a literary hit in the form of Guy
Ritchie’s new kick-ass new version of Sherlock Holmes. Robert Downey Jr. steps up as the crack detective and delivers a fantastic turn aided in no small part by his friend and partner in sleuthing Dr. Watson (Jude Law – acting better than he has in years!).

Villain of piece is the nefarious Lord Blackwood (Mark ‘Stardust’ Strong), a serial killer with a taste for young women and the black magic. Thwarted by Holmes in a fantastic opening scene, Blackwood proves to be a hard foe to keep down, rising from his tomb to continue his evil plans...

Holmes is a classic literary character from the mind of Sir Arthur Conan Doyle and many were concerned when it was announced that Guy ‘Lock Stock and Two Smoking Barrels’ Ritchie was going to direct this big budget reworking. But Ritchie delivers a rousing detective adventure that races along on a tide of excellent action scenes, witty dialogue and thrilling mystery.

Backed up with some really impressive CGI effects, this Holmes inhabits a living, breathing nineteenth Century London. The centre piece is a half built Tower Bridge above a bustling murky Thames, everything crackles with stylish attention to detail and a pleasing gothic feel which sucks viewers in. This dark and foreboding London provides a suitably classy backdrop for a deadly plot which stretches high into the corridors of power.

Hardcore fans of the novels should be pleased to learn that Ritchie’s Holmes is less pipe and Deerstalker Hat, and more fist fighting dandy whose brilliance at deductive detective work is mirrored by a self doubting, troubled inner character. This feels more like a detective hero we can really root for.

Credit must go to Robert Downey Jr. and Law who have brilliant screen chemistry and whose banter is fantastic to behold. Also on hand for some decent support is the lovely Rachel McAdams as a mischievous thief who has some ‘history’ with Holmes. 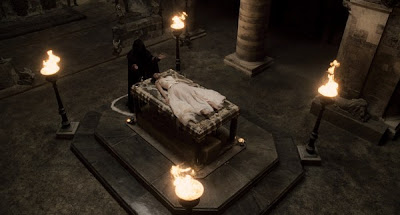 "Holmes is up against some very dark arts..."

It’s elementary my dear that with ‘untitled Sherlock Holmes sequel’ listed on both Ritchie and Downey Jr.’s coming soon slate - we can lookl forward to this being the start of a new franchise. Which is good news for movie fans as Sherlock Holmes has never been this much fun before.

Darkmatters final rating of: öööööööö (8 – worth seeing on the big screen for sure!)

Comedy 7 (Law and Downey Jr. are a laugh riot together)

Great movie! I expected less! As a fan of Brett, wasn't sure I could handle or like another Holmes, but I did! This is Holmes for the 21st cen, with some action, with a little romance, and most of its original characteristics, it can please both old and new fans!

I would recommend you to watch old Soviet films about Holmes.